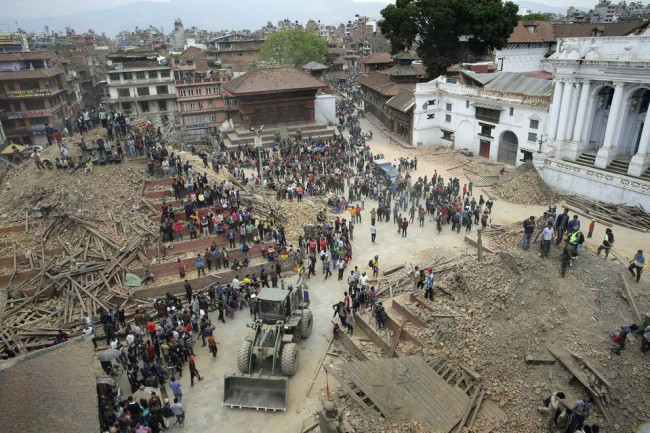 For some time scientists have realized that the Kathmandu valley is one of the most dangerous places in the world, in terms of earthquake risk. And now a combination of high seismic activity at the front of the Tibetan plateau, poor building standards, and haphazard urbanization have come together with fatal consequences. The magnitude 7.9 earthquake that hit Nepal hit just before noon, local time, on Saturday around 48 miles north west of Kathmandu. The Indian tectonic plate is driving beneath the Eurasian plate at an average rate of 45mm per year along a front that defines the edge of the Tibetan plateau. This force created the Himalayas, and Nepal lies slap bang along that front. The quake was shallow, estimated at 12km depth, and devastating as the Indian crust thrust beneath Tibet one more time.

Historic buildings in the center of Kathmandu have been reduced to rubble. Brick masonry dwellings have collapsed under clouds of dust. Weakened buildings will now be vulnerable to aftershocks, which continue to rattle Nepal through the day. Multiple aftershocks above magnitude 4 hit in the six hours following the earthquake. Away from the populated Kathmandu valley, in the heights of the Himalaya, climbers on Everest tweeted reports of damage to base camp, and fatal avalanches on the flanks of the mountain. The steep valleys and precipitous dwellings of the more populated areas are vulnerable to landslides. Now is the time for us all to consider how we can help those most in need, in practical ways. 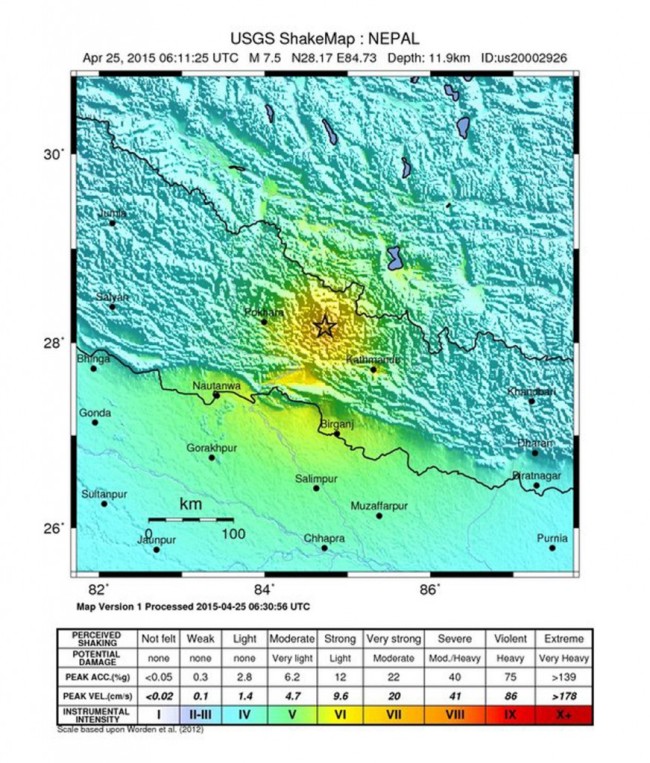 Although one cannot predict the day or the hour, the scenario that we see on our TV screens had been thought through many times already, with one particularly prescient article written almost two years ago to the day. The likely impacts of the quake can be readily estimated, and in any case will soon be reported directly from the surroundings. The number of deaths reported is only, tragically, going to increase, with the US Geological Survey putting estimates of fatalities in the range of thousands to tens of thousands. Just one week ago my geophysicist colleagues returned to the UK from a meeting in Kathmandu, Nepal, as part of the Earthquakes Without Frontiers research project. The focus was earthquake risk reduction and hazard awareness in Nepal. The risks have been recognized for some time, but I don’t suppose any of the participants expected their work to be thrown into the spotlight so soon. Professor James Jackson, of Cambridge University and one of the leaders of the Earthquakes Without Frontiers project, talked with me on his return from Kathmandu last weekend. He described tall, thin houses, with extra stories built up on top, explaining how they arise from the Nepalese tradition of sharing inherited property between siblings, with houses split vertically between them. The only way to build is upwards. In a seismic area, it’s a recipe for disaster, and one can’t help but wonder what this phenomenon has wrought on families in Kathmandu.