NASA Visualization Shows Air Quality Improving Across the U.S. But is the Trend Beginning to Reverse?

This animation shows significant decreases in nitrogen dioxide pollution, averaged yearly from 2005-2011, across the United States. (Source: NASA Goddard's Scientific Visualization Studio/T. Schindler) Despite an increasing population and ever more vehicles on the roads, air quality across the United States has improved significantly in recent years. Watch the skies clear in the animation above, which shows how levels of nitrogen dioxide pollution changed between 2005 and 2011. The animation is based on measurements by the Ozone Monitoring Instrument on NASA's Aura satellite. This is clearly good news. But it's only part of the story. Nitrogen dioxide is one of six air pollutants regulated by the U.S. Environmental Protection Agency. It lends a yellowish-brown tinge to the skies, and it can cause respiratory problems. Nitrogen dioxide also contributes to ground-level ozone, which also cause serious health effects. In its release of the animation and other graphics yesterday, NASA attributed the improvement in air quality to regulation, better technology, and "economic changes." The agency didn't specify what it meant by the latter, but I assume this means slower economic growth resulting from the financial crash in 2008. In fact, if you watch the animation carefully, you'll see some areas, particularly the Boston-Washington corridor, that experience a slight uptick in pollution in the last year covered. Could this increase be attributed to a pick-up in economic growth? That's a good guess. I'll try to find out and report back with an update. In the meantime, there's no question that many of us are breathing easier now, including residents of the densely populated New York metropolitan area: 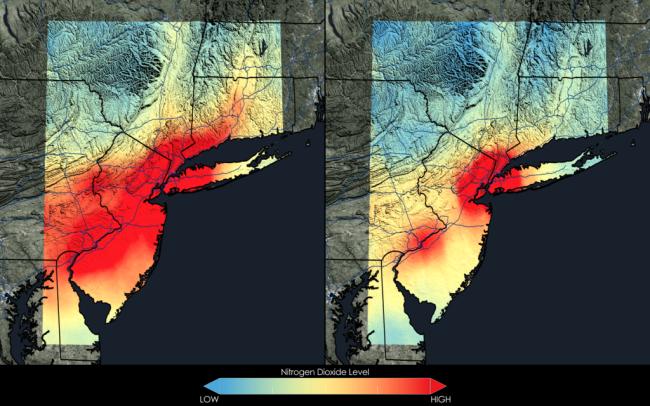 Satellite monitoring has documented a 32 percent drop in nitrogen dioxide pollution over New York City between 2005-2007 (left) and 2009-2011 (right). The New York metro area has the highest population in the nation. (Source: NASA Goddard's Scientific Visualization Studio/T. Schindler) And people who live in Atlanta experienced an even greater improvement, with a 42 percent decrease in nitrogen dioxide pollution. Unfortunately, the Denver metropolitan area, which I call home (I live near Boulder), has experienced much smaller improvements — a 22 percent decline in nitrogen pollution. That's still good news. But why less so than in Atlanta and New York? This region has seen a huge increase in drilling for oil and natural gas. And as of a year ago, oil and gas operations in Colorado were the third largest producers of nitrogen oxide pollution, according to the Denver Post. Nitrogen oxides are not the only issue, new research published this past May shows. Here's an excerpt from a summary by the Cooperative Institute for Research in Environmental Science at the University of Colorado:

During two days of intensive airborne measurements, oil and gas operations in Colorado’s Front Range leaked nearly three times as much methane, a greenhouse gas, as predicted based on inventory estimates, and seven times as much benzene, a regulated air toxic. Emissions of other chemicals that contribute to summertime ozone pollution were about twice as high as estimates, according to the new paper, accepted for publication in the American Geophysical Union’s Journal of Geophysical Research: Atmospheres.

Despite improvements in nitrogen pollution, the Front Range — a highly urbanized area stretching along the eastern front of the Rockies — still fails to meet federal air quality standards. To address the problem, the state's air quality control commissioners in February "adopted tougher air pollution rules for the oil and gas industry — the first in the nation to cover methane, a gas linked to climate change," according to the Denver Post. I mention this just to highlight the complex tradeoffs involved in these issues. Increased reliance on natural gas has helped reduce the nation's emissions of carbon dioxide, the greenhouse gas that is contributing the most to global warming. That's because natural gas produces less carbon dioxide when burned than coal does. On the other hand, the upsurge in natural gas production has clearly slowed improvements in air quality in the region where I live. Moreover, methane — a very potent greenhouse gas — is leaking from oil and gas operations to a much greater degree than expected. So the overall picture is more complex than a simple NASA animation suggests.