NASA Satellites Use Lasers to Map the World’s Tallest Forests 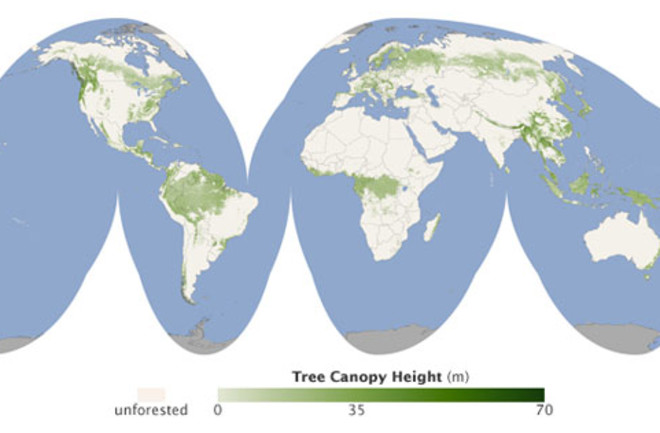 It's not just the sequoias—the towering firs, hemlocks, and other trees of the Pacific Northwest make its forests the tallest in the world, matched only by those in Southeast Asia. That's according to a study by NASA, which has completed the first survey of the heights of forests throughout the world. The map, created by NASA's ICESat, Terra, and Aqua satellites, does more than give bragging rights to West Coast residents. For one thing, it could help scientists who are trying to predict while wildfires might strike, as well as those who want to determine what kind of forests make the best carbon sinks.

Michael Lefsky and colleagues spent years compiling the data, which they describe

in the journal Geophysical Research Letters.

Lefsky used data from a laser technology called LIDAR that's capable of capturing vertical slices of surface features. It measures forest canopy height by shooting pulses of light at the surface and observing how much longer it takes for light to bounce back from the ground surface than from the top of the canopy. Since LIDAR can penetrate the top layer of forest canopy, it provides a fully-textured snapshot of the vertical structure of a forest -- something that no other scientific instrument can offer [National Geographic].

The team had to combine the data from a quarter-billion laser pulses to make this map. In these images, the data is rounded off: The smallest points represent regions of about 2 square miles, and the color comes from the average tree height there, not the absolute tallest individuals. Interestingly, the forest map was just a byproduct of the measurements these satellites could take. ICESat

, for instance, carries LIDAR capabilities because its main function is to measure the mass of ice sheets, while the Aqua

satellite studies the water cycle. When NASA launch future satellites with more sophisticated imaging technology for vegetation, the forest map could get even better.

"This is a really just a first draft, and it will certainly be refined in the future," said Lefsky [National Geographic].