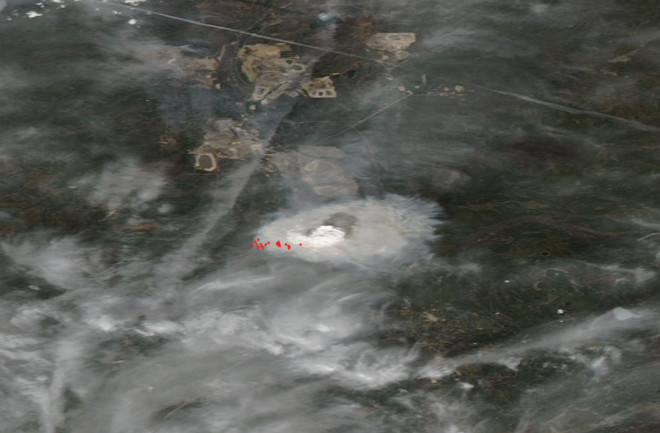 A towering fire cloud, known scientifically as a pyrocumulus cloud, rises from a blaze in the Canadian city of Fort McMurray, as seen in this image captured by NASA's Aqua satellite on Tuesday, May 3rd, 2016. (Source: NASA Worldview) Hot, dry and windy conditions today could worsen the vicious wildfire that has forced evacuation of Fort McMurray, the oil sands capital of Canada in Alberta. Yesterday, officials ordered the entire city of 61,000 people to leave, prompting the largest wildfire evacuation in Alberta's history. Several neighborhoods in the city are believed to have been lost to the fire, according to the CBC. But critical infrastructure, such as the city's water treatment plant and bridge over the Athabasca River, appeared to remain intact — at least so far. As the fire exploded yesterday, it sent a clouds of ash and water vapor billowing high into the atmosphere. The result was a towering fire cloud, known scientifically as a pyrocumulus cloud, that was visible to NASA's Aqua satellite passing overhead. The image above shows what Aqua saw.

The red dots in the image indicate pixels where a sensor on the satellite detected active burning. The bright, white pyrocumulus cloud pokes up from duller, grayish smoke. To the north of the cloud you can see treeless areas associated with surface mining of oil sands. I'll be keeping an eye on satellite imagery today. With a bit of luck, the fire will calm down and I will have nothing dramatic to show. Let's hope so.