In their many years of research, paleontologists Richard Fortey and Brian Chatterton have come across some mighty strange trilobites, ancient sea creatures that resembled a cross between a lobster and a beetle. They have seen trilobites with spines and ones with spikes, trilobites the size of a dime, and others as big as a dog. Yet Fortey, of the Natural History Museum in London, and Chatterton, of the University of Alberta in Canada, were stunned when a commercial fossil dealer in Morocco presented them with a beautiful specimen of Erbenochileerbeni, a one-and-a-half-inch-long trilobite with cylindrical eyes, each tiled with 560 lenses, that rose from the creature’s head like tiny quarter-inch periscopes. These unique eyes gave the animal the ability to see in all directions at once without turning its head. 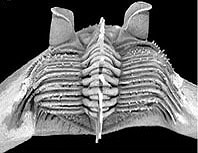 Erbenochile's towering eyes let it watch all around for predators and prey, while the rest of its body remained safely concealed in ocean-floor sediments.

Erbenochile, described by Fortey and Chatterton in the September 19 issue of Science, roamed the seafloor off the Moroccan coast some 400 million years ago, using its prodigious peepers to search for tiny soft-bodied organisms and other suitable snacks. The creature’s towering eyes were topped with visorlike eyeshades, which allowed Erbenochile to go about its business during the daytime. Previously, trilobites like Erbenochile were thought to be nocturnal. Since Chatterton and Fortey published their description of the tower-eyed trilobite, another trilobite collector in Bolivia has informed Chatterton of another species with a similar eyeshade and a record-breaking 860 lenses. So far, Chatterton has only seen the animal in photographs.

All of Erbenochile’s specialized adaptations came at an evolutionary price: The animal was far from streamlined. It was better able to spot the large predatory fish that liked to snack on trilobites, but the added bulk of its eyes meant it was also less able to get away quickly. At top speed, it probably moved along the ocean-bottom muck no faster than a running cockroach. In the end Erbenochile fared no better than the other trilobites that roamed the Devonian seas. Trilobites disappeared from the fossil record during a major extinction roughly 250 million years ago.

Erbenochile was purchased from its collector by the Natural History Museum, although Chatterton and Fortey acknowledge that the mere existence of a commercial fossil trade makes many paleontologists’ blood boil. Moneymaking businesses put profit before scientific preservation, some say, and allow rare specimens to fall into the hands of private collectors rather than into accessible museum or university collections. Chatterton and Fortey believe that responsible dealers can be good for science. Preparing this one specimen might have taken more than 100 hours using a delicate air gun—time a busy scientist cannot afford to spend. "If the Natural History Museum hadn’t been willing to buy this, it may have been lost to science, and if those people hadn’t been out there looking for trilobites it would never have been discovered," Chatterton says.