Move Server Farms to Desert? Data Is Easier to Move Than Power, After All 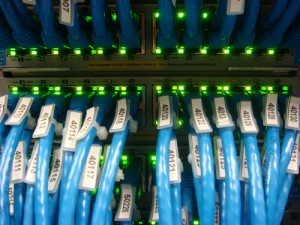 Coming to a desert far, far away from you?

are the Hummers of the information age: they use a substantial 1.5% of the world's electricity, and that number's growing fast

. But by sticking them out in the middle of sunny, windy nowhere, computer scientists posit, we could make use of renewable energy that’s otherwise too far from civilization to be used. How the Heck:

The Future Holds: We might be closer to doing this than we think. At least one company is already running its network of data centers with renewables, and they have figured out a way to solve the problem of reliability, according to Technology Review

The network uses supervisor software to shift computing according to the availability of wind and solar power at various sites, and, says Martin Brooks, an independent research consultant working on the GreenStar Network, this works well enough to allow the network to handle even finicky applications like running a video server. The video, says Brooks, doesn't skip even as the virtual machines hosting it are transferred, over an ultrafast fiber-optic network, between servers thousands of miles apart. "We have certainly had people consider [this project] outlandish, but we live it every day, so we don't think that way," he says.

As for the desert angle, no one seems to be doing it yet—but it seems worth a try.