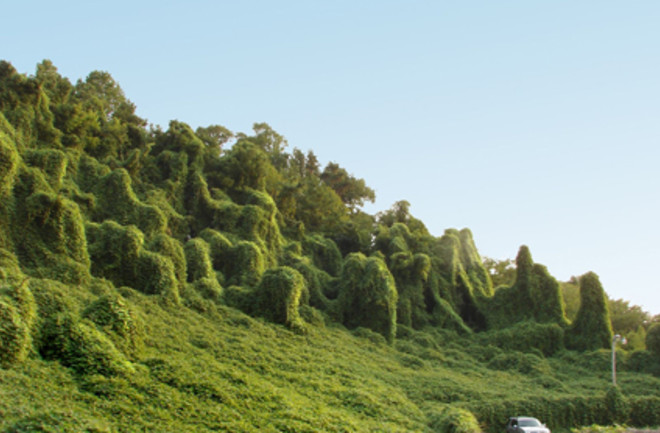 Kudzu: It's worse than you thought. The invasive plant now covers more than 7 million acres in the United States, mostly in the Southeast but not limited to there. Besides overrunning trees as it spreads like wildfire, the vine also brings another danger: In a study in the Proceedings of the National Academy of Sciences, Jonathan Hickman sounds the alarm that kudzu could cause a spike in ozone, polluting the air. Ozone, of course, is a good thing when it's high in our atmosphere, blocking some of the sun's harmful radiation. But down on the surface of the planet, ozone isn't such a good thing. It can cause respiratory problems in people and harm plants' ability to absorb carbon dioxide; it also is a major constituent of smog.

Kudzu's contribution to ozone levels works like this: Like other members of the pea family, or legumes, Kudzu grabs nitrogen from the air and puts it into the soil. There microbes convert nitrogen into nitrous nitric oxide, one of the pollutants that also comes from automobile exhaust. That gas escapes from the soil and into the air, and undergoes reactions that lead to the creation of ozone [Discovery News].

When this reaction happens on a small scale it's not a big problem. However, there's getting to be so much kudzu in the U.S. that Hickman decided to measure what its ozone contribution might be. So his team studied the soil of Madison County, Georgia

, picking some areas where kuzdu had invaded and some where it had not. In the kudzu-ed areas, he says, nitric oxide emissions were double that of the kudzu-free areas. To drive home the point, Hickman and his colleagues ran a simulation in which kudzu spread over the entirety of its region except for soils in the city or those used in agriculture. Crunching those numbers, the team estimated a dramatic increase—35 percent—in the number of days that would register an atmospheric ozone level in excess of the safe limit set by the Environmental Protection Agency. That's a pretty extreme scenario; kudzu alone isn't going to drive up ozone pollution by a third. Even with kudzu stretching out ever further, its present contribution to ozone

is most likely a minor one, Hickman says, but the ozone potential is one more reason to loathe the vine.

He acknowledged that any soil used to grow nitrogen-fixing plants or were fertilised for agricultural reasons would result in an increase in gases involved in the formation of ozone. "But in those cases, we are doing these things for necessary reasons -- namely food production," he observed. "In the case of Kudzu, it is an undesirable plant that is spreading over a large area in the south-east US" [BBC News].

It's also an undesirable plant that people brought to America on purpose, making it not just a poster child for invasive species, but also for importing a foreign organism to try to fix some other problem in an ecosystem.

Kudzu (Pueraria montana) is a rapidly growing vine native to Asia that was introduced to the United States in 1876 at the Centennial Exposition in Philadelphia as an ornamental plant and later promoted to farmers in the Southeast as a means of controlling soil erosion by the U.S. Soil Conservation Service during the 1930s [LiveScience].

DISCOVER: Humans vs. Animals: Our Fiercest Battles With Invasive Species