Last night Chris hit Raleigh on his second stop of the Storm World tour so I caravaned over to Quail Ridge Books and Music with a couple carloads of friends to hear what he had to tell us about Hurricanes, Politics, and the Battle over Global Warming. Now as I realize my review could seem suspect (conflict of interest and such), figured my overly critical friends would be able to provide an excellent unbiased perspective. As it turns out they're just as impressed as me because the book involves a subject that's topical, timely, and affects every one of us. Chris delivers his ideas in a calm, thought-provoking way and provides a realistic portrayal of the players and politics involved. But you don't have to take my word for it. This morning he heads to Florida and you'll be able to catch up with him later on Science Friday with Ira Flatow. 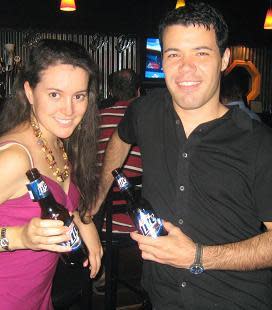 After the talk, we went out for the obligatory Miller Lites to celebrate. Call it a serendipitous 'intersectioning' of The Intersection as it's great to be back in the same time zone with you Chris! At least, for the few days we're both on the Atlantic coast..