Millions of Years Ago, the Poles Moved — And It Could Have Triggered an Ice Age

The North and South Poles haven't always been in the same spots. 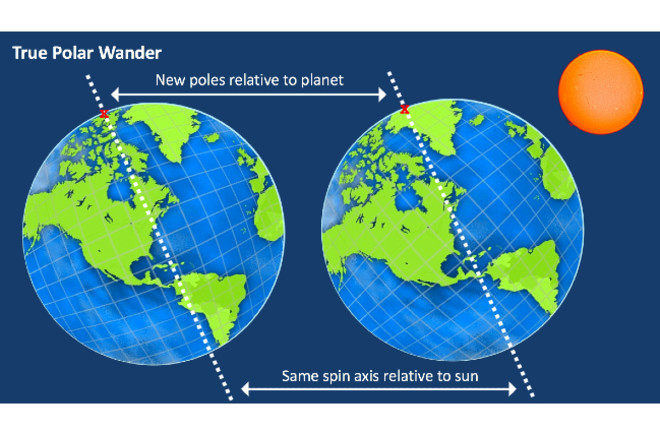 During true polar wander, the location of the Earth's spin axis, and therefore the north and south poles, shift relative to the rest of the planet. (Credit: Funk/Discover, elements: Earth, Pixabay; sun, Wikipedia Commons)

Geologists at Rice University have uncovered evidence that suggests Earth’s spin axis was in a different spot millions of years ago, a phenomenon called “true polar wander.” The change, which occurred sometime in the past 12 million years, would have shifted Greenland further up into the Arctic Circle — which may have contributed to the onset of the last major Ice Age, 3.2 million years ago.

You can think of the Earth’s spin axis as the invisible axle around which the planet spins. This axle has always stayed the same relative to the sun, giving our Earth its characteristic axial tilt. But the places this imaginary axle emerges from the Earth’s surface — the North and South poles — haven’t always been the same. Those points have shifted at various times in our planet’s history, meaning that the true poles have been in different places.

The new evidence for one of these shifts comes from an analysis of millions of years of data left behind in the geological record: in the path of hotspots like Hawaii and in sediments and magnetic fields from the sea floor.

The bulk of our planet is made of molten rock beneath the outer crust. Floating and shifting around on this magma are tectonic plates, which make up our continents and the ocean floor. In some places, though, magma reaches the surface of the crust and seeps though, what’s called a “hotspot.” These areas have lots of volcanic activity: In the U.S., there are hotspots underneath Yellowstone and Hawaii. These spots move, too, relative to the Earth’s inner core, but not nearly as “fast” as the tectonic plates.

As a tectonic plate moves over a hotspot, it leaves a path in its wake. For instance, the remnants of the Pacific Plate’s movement over the Hawaiian hotspot is much longer than just the above-water islands that the hotspot’s volcanoes created. The full path, marked by underwater dormant volcanoes, stretches 3,600 miles across the Pacific from Hawai’i to Alaska’s Aleutian Islands.

This heatmap shows the path of the Hawaiian hotspot across the Pacific Plate as a chain of dormant volcanoes from present-day Hawaii to Alaska’s Aleutian Islands. (Credit: Wikimedia Commons)

Geologists can use paths like this to see not just how the plate has moved over the hotspot, but also how the hotspot itself has moved over time. By looking at multiple hotspots across the globe, they can quantify hotspot movement after subtracting out the known movement of the tectonic plates above.

The first evidence Woodworth and Gordon found for a shifting spin axis was that a past shift of the equator can be seen in the geologic record.

We can always tell where the equator has been thanks to something called Coriolis forces. These occur due to the spinning of the Earth, which creates winds that push ocean waters to the north in the Northern Hemisphere, and to the south in the Southern hemisphere. This leads a deficit of surface water along the equator in the ocean. The ocean sorts itself out by sucking up more water from deeper down. This brings up extra nutrients to the surface, which means more plankton and other critters can live in those waters. When these organisms die, their bodies are deposited as sediments on the sea floor — all along the equator.

These extra sediment deposits are a tell-tale sign of where the equator has been. Since we know the Pacific Plate has been steadily moving to the north, you have to look further and further north to find older and older equator-sediment deposits.

But when you subtract out the movement of the Pacific Plate, the path of these equator records shows something unexpected: The equator wasn’t where it is now from 48 million years ago to about 12 million years ago. In other words, the equator moved. The only way for the equator to move is for the spin axis of the Earth — the poles — to move.

The other piece of this geological puzzle came again from the ocean, but this time from magnetic fields recorded by ships and planes surveying the sea floor.

The past orientation of this magnetic field can be measured in the modern-day ocean floor. That’s because when new crust is made on the ocean floor, it maintains the magnetic signature of the poles’ location at the time of its formation. Because of the scale of these records, the wandering of the magnetic poles is averaged out, meaning that the magnetic poles are an accurate proxy for geographic poles. Woodworth and Gordon used these magnetic fields in the sea floor to see where the geographic poles were at different times over the past 50 million years.

In black, the extent of the glaciers during the last Ice Age. Geologists think one of the triggers may have been a shift in the Earth’s spin axis sometime in the past 12 million years. (Credit: Wikimedia Commons)

In their new study published in Geophysical Research Letters, Woodworth and Gordon explain that all signs point to a phenomenon called “true polar wander,” in which the spin axis of the Earth shifted locations relative to the surface of our planet.

They found that between 48 million and about 12 million years ago, the Earth’s spin axis, and therefore its geographic north and south poles, were in a different place than they are today. Long ago, the North Pole would have been closer to Greenland than it is now, and the South Pole would have shifted similarly to the west. Somewhere around 12 million years ago, the poles moved to where they are now.

This shift could have had serious effects on the Earth’s climate, which is particularly interesting given that the last ice age started somewhere around 3.2 million years ago. The change would’ve shifted Greenland up into the Arctic circle, which could have affected ice accumulation at that time. Though more research is needed to sort out the mechanisms of how this would have affected climate change at the time, Gordon, a professor of geophysics, hopes this could add insight to a past climate change in a way that could inform current climate science.

“It’s nice when we can connect global phenomena related to the plates … to the important problem of climate change and also the paleogeographic framework of the world,” says Gordon.