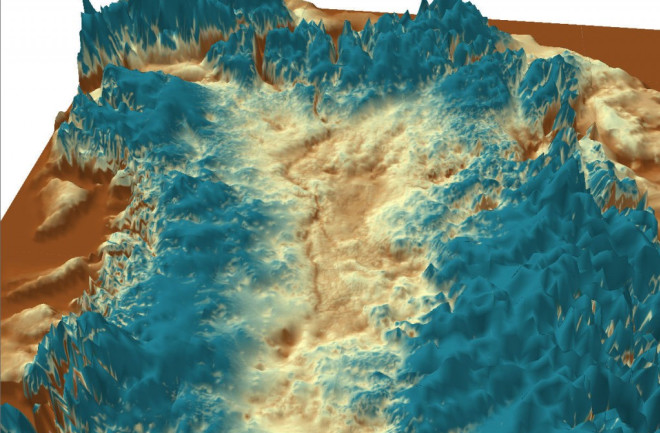 3-D view of the subglacial canyon, looking northwest from central Greenland. Image courtesy J. Bamber, University Bristol Researchers have discovered a mega-canyon lurking below Greenland’s giant ice sheet — a snaking canyon at least 450 miles long that’s been a crucial drainage corridor since before ice covered the island more than 3.5 million years ago. The canyon is up to 2,600 feet (800 meters) deep, and its scale in width and length rivals parts of the Grand Canyon in Arizona. It starts beneath the ice in central Greenland and winds its way north to drain into the Arctic Ocean, according to new research from scientists at the University of Bristol, as well as researchers from Canada and Italy. The finding helps explain why Greenland doesn't have pools of water under its ice sheet like Antarctica does: The canyon may be helping divert meltwater and thus keeping Greenland's ice sheet stable.

Ice-penetrating radar, which at specific frequencies travels through the ice and bounces off bedrock below, has been used to collect data on Greenland's features for the past 40 years. In addition, previous research has showed through surface topographical measurements that there was some sort of linear landscape feature beneath the ice, but scientists weren't sure of its extent. This latest research team combined datasets of the ice-penetrating radar data as well as the topographical information to discover a major subglacial canyon, which has been what the paper calls a hydraulic pathway for millions of years. At the canyon’s mouth on the northern edge of the island, the deep fjord is up to 6.2 miles (10 km) wide. The study appears today in Science.

The water that melts on top of an ice sheet such as Antarctica's or Greenland's is a key focus in current climate models. When meltwater seeps to the bottom of an ice sheet, it can broadly do one of two things: pool up in a lake or flow out to sea. And though the science is still developing, it appears that when water pools up in lakes it lubricates the base of the ice sheet, and thus makes the ice sheet shift more quickly out to sea. Chunks of ice into the sea in turn raise global sea levels. Greenland's newfound canyon may thus serve a protective effect for the island's ice sheet, though more research on the under-ice water dynamics is definitely needed. And the discovery of this feature alone is fairly remarkable, as lead author Jonathan Bamber of the University of Bristol points out: "With Google Streetview available for many cities around the world and digital maps for everything from population density to happiness, one might assume that the landscape of the Earth has been fully explored and mapped. Our research shows there's still a lot left to discover."