Hiawatha crater has been hiding in plain sight (you can see it on Google maps), but nobody noticed it til now. 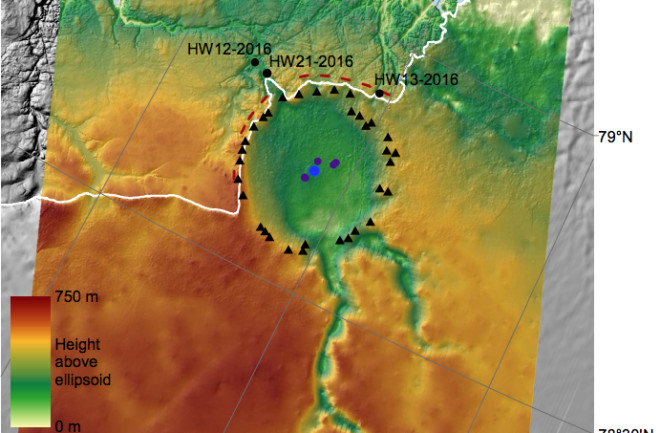 Scientists have long debated whether a massive impact caused an Ice Age climate swing. Recently researchers discovered a crater buried beneath Greenland that may be the smoking gun for the theory. This image shows the topography under the site at Hiawatha glacier, mapped with airborne radar data (1997 to 2014, NASA; 2016 Alfred Wegener Institute). Black triangles and purple circles are elevated peaks around the rim and center. Dotted red lines and black circles show locations of additional sampling. (Credit: Kjæer et al. / Science Advances)

Most of Earth’s surface has been plotted, mapped and measured. And along the way, scientists have turned up a plethora of craters big and small. But there was always one major crater missing.

12,800 years ago, during the Pleistocene, Earth was warming up from its last Ice Age. Temperatures slowly rose while glaciers retreated, that is, until something major happened that triggered a cold snap big enough to leave its mark on the geologic record. Over the course of just decades – the blink of an eye in geological timescales – the planet cooled somewhere between 3 and 11 degrees Fahrenheit (2 to 6 degrees Celsius). The resulting period is known as the Younger Dryas, a mysterious 1000-year blip in history.

Many scientists have suggested – with evidence – that the Younger Dryas was triggered by a meteorite impact. But others have held out, suggesting that volcanic eruptions or, what seems to be the leading favorite, some sort of massive freshwater flood temporarily disrupted climate cycles based out of the North Atlantic. But the main reason scientists have been slow to accept the impact hypothesis is simple: There’s just no crater.

But research out today in the open-access journal Science Advances suggests that maybe we haven’t looked everywhere. The work, led by Kurt Kjær, professor at the Natural History Museum of Denmark and University of Copenhagen, describes a previously overlooked, 19-mile-wide crater that’s been hiding in plain sight in northwest Greenland’s Hiawatha Glacier. In fact, it’s only about 150 miles from Thule Air Base – the U.S.’s northernmost Air Force base and the place where NASA’s IceBridge planes took flight. You can see about a third of the crater’s rounded outline on Google Earth.

Could this be the sought-after Younger Dryas crater? That depends on how old it is, but it hasn’t been precisely dated yet. Right now, the researchers can only confidently say it’s between 3 million and 12,000 years old – definitely from the Pleistocene.

Dating a crater like this is certainly possible, but because this crater is so deep below the ice in such a remote location, the team couldn’t exactly stop by to pick up some samples. Kjær says they’re working on raising enough interest to embark on the type of field expedition that would be required to core through the 3,000 feet of ice and into the crater itself.

This latest study describes the evidence used to verify that the strange circular feature is, in fact, a crater caused by an asteroid. But early age estimates show that it’s at least possible that this is the 12,800-year-old crater that so many researchers have hoped to find for decades. We’ll have to wait and see.

Rendition of the ice radar survey over Hiawatha Glacier by the Alfred Wegener Institute’s Polar 6 research aircraft. The radar data reveal both the topography beneath the ice and the layering of the ice itself. (Credit: Natural History Museum of Denmark, Cryospheric Sciences Lab, NASA Goddard Space Flight Center, Greenbelt, MD, USA)

How They Found The Crater

The research team wasn’t out scouring the globe for craters. They were in Greenland to map Arctic sea ice with NASA’s IceBridge project when a string of serendipitous events led to the discovery.

Joe MacGregor, a co-author on the study who works for NASA’s IceBridge project, says he was lucky enough to be in the right place at the right time to get involved in the crater project.

To conduct the IceBridge surveys, MacGregor explains, a team flies an airplane over the ice and uses radar instruments to map the thickness. To do this, they must fly at a relatively low altitude. But when they’re on their way to a survey, they fly much higher – 10,000 to 15,000 feet – to save fuel. Normally, their radar equipment doesn’t work this high.

Hiawatha glacier, just north of their base at Thule Air Base, was a spot they flew over repeatedly while on the way out to their surveys.

“It just so happened that the guys who were running the radars were trying to test the performance at high altitude most of the time,” says MacGregor. And, surprisingly, the instruments worked, mapping the glacier in the process.

While looking over the resulting radar-generated map, a few scientists from the team noticed the crater-shaped depression in the Hiawatha glacier.

“There was this big circular feature up in northwest Greenland,” says Kjær. “We started to think, wow, could this be right? Could that be an impact crater?”

“Of course then we were faced with the big challenge of finding out if it was actually an impact crater,” says Kjær.

Kurt Kjær collecting sand samples at the front of Hiawatha Glacier. This sand was transported by the glacier from the bottom of the impact crater to the ice margin, and it has yielded a wealth of information on the impact. (Credit: Svend Funder)

How to Confirm An Impact Crater

As great as it would be to find a giant hunk of space rock or a baby Clark Kent to confirm a geologic indentation’s extra-terrestrial origins, scientists are usually not so lucky when examining a prehistoric crater. But there are a number of tell-tale signs that a big round hole in the ground was caused by a meteor impact.

For instance, there are a number of minerals, like quartz, that undergo significant changes in their properties when exposed to the type of physical force and pressure brought by a meteorite. These changes make the minerals in a crater look different from those in the surrounding bedrock.

Andrew Glikson, an earth scientist at Australian National University who studies asteroid impacts, was not involved with this study but “found it to document a bona-fide impact structure.”

But others, like David Kring at the Lunar and Planetary Institute remain skeptical. Kring comments that “it is difficult to fully assess the data in support of shock-metamorphism, so I am not yet sure convincing, diagnostic evidence of impact exists.” Kring was foundational in confirming the role of the Chicxulub crater’s impact event in the K-T boundary mass extinction.

The authors, their critics, and their supporters were all very clear about one thing: It is too early to link this crater to the Younger Dryas. But assuming it’s a real impact site and if it’s later dated to be 12,800 years old, the implications will be far reaching.

If this crater could be dated to 12,800 years old, it could certainly be credited as the Younger Dryas instigator, and would end this decades-long debate.

What’s more, because of the crater’s location on Greenland’s ice sheet, it’s possible that the impact could’ve caused exactly the kind of massive influx of freshwater to the North Atlantic that the Younger Dryas-flood proponents stand behind.

Hitting an ice sheet with a meteorite could cause a number of water-related effects. According to Allen West, retired geophysicist, the impact could vaporize ice, releasing water molecules into the air that would eventually rain back down; it could destabilize the ice such that it slides into the water; it could create icebergs. Any of these, or a combination of them, could have led to a flood of freshwater into the North Atlantic.

There’s still much to learn about the new crater, including its age and any impacts it may have had on climate at the time – Younger Dryas or not.

“There’s a lot of new potential things to go after here after this discovery,” says Kjær.

Regardless of the impact of this specific crater, Kjær says, he’s thrilled that the discovery was still possible.

“I think it is just super exciting that given this day and age, 2018, you can still go out in the world and see something that is so big, that nobody has seen before,” says Kjær. “The world’s surface has been surveyed forth and back with all kinds of things, satellites or whatever, but you can still go out and make such a discovery. I think if I was a young scientist or person wanting to do science, I would say, wow, the age of discovery is still honorable.”