Climate change is a likely culprit, but scientists are still determining the reason for the frozen tundra's cavernous phenomena. 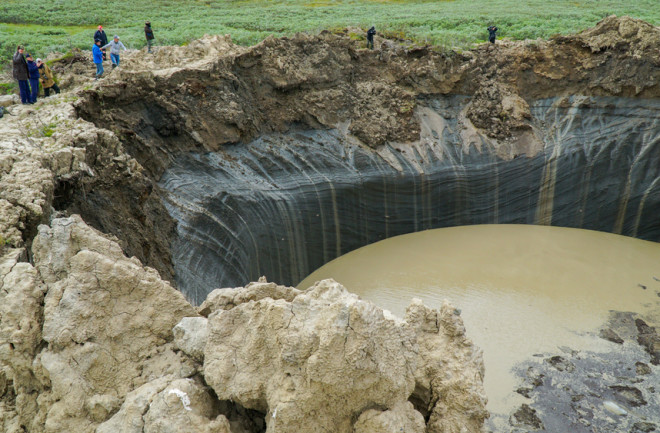 A 2015 exploration of a gas emission crater on the Yamal Peninsula in Siberia, Russia. (Credit: Aleksandr Lutcenko/Shutterstock)

In 2014, Greg Fiske, a geographer at the Woodwell Climate Research Center, was in Siberia during an unusually hot period — about 90 degrees Fahrenheit — when a strange news story came out. Pilots had flown over the Yamal Peninsula and reported a huge hole in the ground that seemed to have appeared out of nowhere, in the same region that Fiske and his colleague, Sue Natali, were working. “Siberia is a big place, but we were not far away,” he says. “It was kind of odd to experience that.”

Since then, researchers have identified more of these craters across two regions, the Yamal and Gyda peninsulas. They're part of the Siberian tundra, a massive stretch of land in Russia characterized by a layer of permanently frozen soil just below the surface. And, as scientists have found, the holes, which are roughly 65 feet across when first formed, don’t show up quietly — they blast into existence. Like slow-motion lava, land in Siberia bubbles up until it breaks, leaving behind a depression called a gas emission crater.

Exactly why these massive holes form is still a mystery, though many scientists suspect that climate change is playing a role. “With increasing recognition that permafrost thaw is creating widespread and drastic ecosystem change, a lot of people are trying to understand it, document it, map it and monitor it,” says Scott Zolkos, an arctic researcher at Woodwell. In the process of that work, researchers might be finding even more of these craters in the landscape than people knew existed.

Piecing the Holes Back Together

Everything researchers know about how the emission craters form comes from working backwards — identifying a hole in the tundra and figuring out what led to its formation. The first clues scientists had to work with were the chunks of earth scattered around the initial pit spotted in 2014. Since then, researchers have studied the landscape surrounding each hole, examined the blasted bits to see what kind of material they unearthed, and even descended into the craters to scope out the interior. Compiled satellite imagery from the areas pre-explosion has also illustrated land changes leading up to each blast.

So far, researchers have gathered that the explosions come from gas, likely methane, building up in isolated pockets across the tundra. The pressure accumulates fast — the hills that precede each explosion swell in about three to five years — and when the strain is finally too much, the bubble explodes. Chunks of land, sometimes enough to fill four and a half Olympic swimming pools, blow out. Over time, the edge of the hole melts and expands the perimeter as the bottom fills with water, turning the gaping pit into an inconspicuous lake.

The land that gave way to each identified crater seems to have a few things in common. A thick glaze of ice lies on top of the frozen soil, and beneath it sits a watery deposit that remains liquid at 14 F thanks to its high concentration of salt. While it’s likely the icy surface traps in methane and causes it to build up explosive pressure, researchers still aren’t sure where the gas comes from in the first place.

Some suspect the methane comes from the salty liquid. Other researchers hypothesize that climate change is thawing the region's frozen soil and generating methane. When dead plants and animals trapped in its chill unfreeze, microbes break down the material and release methane as they go. It’s possible methane is coming from the ice within the soil too, as the gas can get trapped in the frozen water.

Even if it’s still not clear how climate change triggers the methane build up, many researchers think the gradual rise in global temperatures has something to do with it. Researchers have noted that several craters were found after unusually warm summers, suggesting that these heat waves exacerbated whatever gas formation was bubbling up beneath the ground.

Additionally, climate change has morphed large portions of the Siberian tundra already. Between 1984 and 2017, 5 percent of the land in the Yamal and Gyda Peninsulas has seen shifts in vegetation, water and even land elevation because of the gradual permafrost melt, according to analysis of satellite data by Zolkos, Fiske and their colleagues. Besides potentially leading to land explosions, the melting permafrost is also collapsing and triggering landslides.

These drastic changes in the landscape could be dangerous. The region is drilled for oil and supports all the accompanying industry and infrastructure, and Indigenous communities still live in the area around where the explosions and the resulting craters appear. In 2017, there was a relatively close call: Locals reported seeing a blast accompanied with fire and smoke.

In theory, predicting where these explosions might take place could prevent people from harm, if given enough of a prior warning. For now, however, researchers are still working on how to identify gas emission craters in the first place, as they can be tricky to find. “If you're standing next to a crater, you think it's a big thing. But if you compare that crater to the continental scale, it's actually really, really small,” Fiske says. Besides, the pits fill with water over time and become less obvious to pick out.

That’s why the research team built an algorithm that could detect existing gas emission craters. The same satellite data analysis that led the team to estimate how much of two peninsulas have changed in the last few decades helped them build their analysis tool. There are 17 reported gas emission craters in the landscape, but only seven recorded in scientific papers, which mean the team had a tiny dataset to work with. Ultimately, the algorithm correctly identified all seven — as well as what might be two previously undocumented emission craters.

The imagery analysis Fiske, Zolkos and their team conducted isn’t ideal for predicting future emission craters, since the surface-level observations leave out the turbulence underneath that leads to their formation. But pulling together an accurate assessment of how much Siberian tundra has changed already and what might change in the future helps researchers get a handle on how to prevent future collapses or explosions.

Of course, the effort would be easier if researchers had a full dataset of some of the features beneath the tundra — something private oil and gas companies have. “The Yamal Peninsula is one of the largest, if not the largest, natural gas fields on the planet,” Fiske says. “That would be very helpful, but that's proprietary information. The information is out there.”