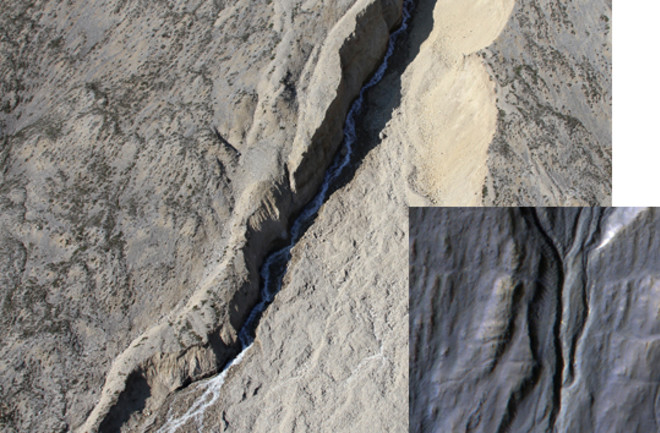 The gully formed by the Ice River spring, the northernmost bubbler ever found, bears a remarkable resemblance to this channel on Mars (inset). | Stephen Grasby/Geological Society of America; NASA/JPL-Caltech/University of Arizona

For years, gullies on the surface of Mars have perplexed Red Planet specialists: How could such a frigid, desert-like environment have supported water?

Clues to this conundrum might lie in the Canadian High Arctic. In June, scientists announced they had found the world’s northernmost perennial spring, whose head, channel and fan are similar to those on Mars.

“It’s almost uncanny in resemblance,” says Benoit Beauchamp, a geoscience professor at the University of Calgary, who discovered the spring with a colleague.

The Ice River spring, as researchers have dubbed it, intrigues scientists for more than its Martian connection. The spring’s source remains a mystery. Since it’s in a polar desert where the average temperature is minus 3.46 degrees Fahrenheit (minus 19.7 degrees Celsius), precipitation can’t explain the cascade, gushing through the Arctic permafrost at nearly 137 gallons per second.

The next time the Canadian team treks back to the river, they’ll be scanning the landscape for other bubblers. “Finding another spring like this would be a tremendous discovery,” Beauchamp says.

[This article originally appeared in print as "Otherworldly Spring Found in High Arctic."]