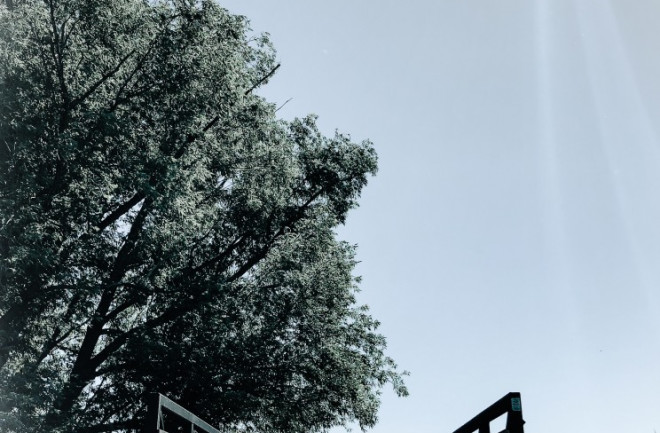 The Sun has burned down with unusual intensity during recent heat waves along Colorado's Front Range. I shot this image with my iPhone in June during a particularly hot run. (Photo: ©Tom Yulsman) It has been an unpleasant few weeks here in Colorado. Brutal heat and air pollution have made many of my daily runs along trails like the one above challenging — to put it mildly. Recurrent poor air quality has taken a particular toll.

Yours truly, during a particularly hot run near Niwot, CO in late June. Smoke from eight major wildfires burning in Colorado — more than anywhere else in the contiguous United States right now — has mixed with urban air pollutants and been cooked by the unrelenting sun into a nasty, stagnant atmospheric stew. That sound you hear while you're reading this is me coughing. I am, of course, not alone in my misery. Not by a long shot. Large swaths of the United States and Canada too have been beset with heat wave conditions over the past few weeks. All-time high temperature records have been tumbling, and unfortunately, people have been dying. Science has shown pretty conclusively that human-caused climate change has made heat-waves like these more frequent, intense and long-lasting. Yet the response from major broadcast news networks has been, well, crickets. More specifically, a survey by Media Matters for America shows that while ABC, CBS, and NBC aired 127 segments on the recent heat waves, only one (on CBS This Morning) mentioned climate change. As a journalist who covers climate change, and an educator who teaches budding journalists how to do it (I direct the Center for Environmental Journalism at the University of Colorado), I think these news networks are failing egregiously.

Daily departures of maximum temperature from normal, June 23-July 10, 2018. (Note: Some days are missing. Images: NOAA NCEI. Animation: Tom Yulsman) Research has shown that heat domes, areas of high atmospheric pressure that send the mercury soaring, have become stronger in recent decades. For example, a 2016 study by meteorologists at the National Weather Service and Pennsylvania State University found that the Northern Hemisphere had experienced an increase in the intensity of summertime heat domes between 1979 and 2010. In a July 9 story, the Washington Post's Jason Samenow reports on an analysis showing that heat domes surpassing a particularly high threshold of intensity have grown much more common since the 1950s. The analysis reveals that nearly all of the heat domes exceeding that threshold in the Western United States "have occurred since 1983 — with the overwhelming majority forming since 1990," Samenow writes. (Please see his excellent story for the details.)

Observed changes in the occurrence of record-setting daily temperatures in the contiguous United States. Red bars indicate a year with more daily record highs than daily record lows, while blue bars indicate a year with more record lows than highs. The height of the bar indicates the ratio of record highs to lows in red, and of record lows to highs in blue. (Source: NOAA/NCEI) Similarly, a major report released in 2017 as part of the U.S. National Climate Change Assessment reached this conclusion — with very high confidence:

This context is essential if you want to fully understand the heat waves that have baked so much of North America this summer. Yet the analysis by Media Matters shows that the national broadcast news programs are not providing it. And that means a huge number of Americans are being under-informed, if not outright misinformed. Some 26 percent of U.S. adults often went to these networks for news in 2017, according to the Pew Research Center. The year prior, nearly 37 million Americans watched those shows. Overall, though, the national broadcast news shows of ABC, CBS and NBC have been losing viewers. I wonder whether this is in part because many people realize that they are not getting the full story on issues like climate change and are turning to other sources of news as a result. Full disclosure: I've given up on watching network TV news (broadcast and cable) because I prefer full, contextual reporting to the happy-talk mumbo jumbo of morning so-called "news" shows, the endless blather of talking heads on cable, and the constricted views of issues presented on broadcast evening news programs.