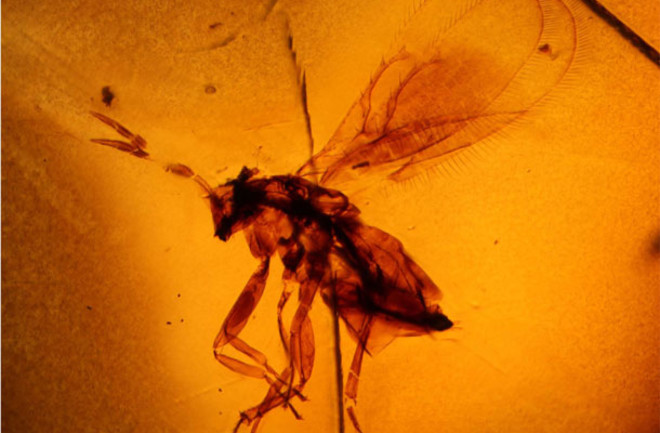 Pliny the Elder wrote in "The Natural History" on the qualities of amber, "So highly valued is this as an object of luxury, that a very diminutive human effigy, made of amber, has been known to sell at a higher price than living men even, in stout and vigorous health." The amber-bound insect you see here is around 95 million years old. Initially this amber was purchased by a Vienna-based mineral dealer in Addis Ababa. Later realizing the potential paleontological value, the dealer sold a big piece to the Natural History Museum in Vienna and several smaller pieces to paleontologists of the University of Vienna. The amber received by Dr. Alexander Schmidt was totally opaque, covered by a dark crust. Dr. Alexander Schmidt: “My colleague Saskia Jancke started to grind and polish the piece randomly to remove the opaque crust, by manual grinding, and stopped (actually, without seeing the insect) a millimeter before reaching the trichogrammatid. We then polished very carefully and it was amazing to see that this wonderful insect was oriented almost parallel to the polished amber surface and that it was not damaged by grinding.” A tiny trichogrammatid wasp belonging to the hymenopterans order is among the first amber inclusions discovered from the African continent. Photograph courtesy of Alexander R. Schmidt/PNAS