Look at This: Map of Future Arctic Shipping Routes 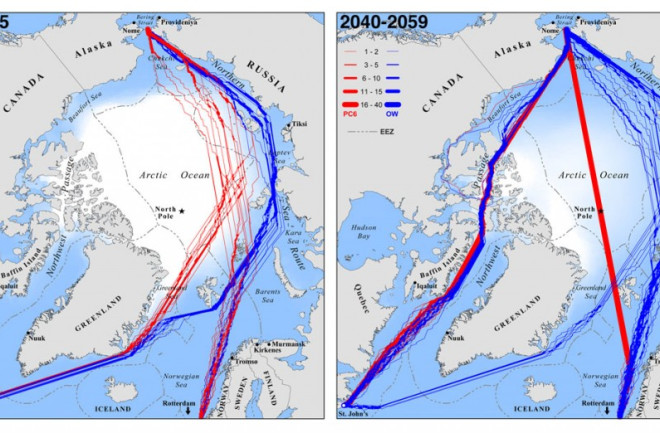 Optimal September navigation routes for ice-strengthened (red) and common open-water (blue) ships traveling between Rotterdam, The Netherlands and St. John's, Newfoundland in present years (left) and in future (right). Image courtesy Laurence C. Smith and Scott R. Stephenson/PNAS The extent of Arctic sea ice has been diminishing since the late 1970s due to climate change, and this decline is predicted to continue in the coming decades. The prospect of open water in these previously icy areas has sparked a lot of speculation about ships being able to navigate between the Pacific and Atlantic Oceans through the Northwest Passage or over the North Pole. Now scientists have analyzed sea ice projections from seven different climate models to come up with an idea of what our shipping routes might look like by midcentury, which they published in the Proceedings of the National Academy of Sciences today. The picture is very different than the one we have now---a boon for commerce with yet-to-be-determined environmental ramifications.