This is a guest post from Melissa Lott, a dual-degree graduate student in Mechanical Engineering and Public Affairs at the University of Texas at Austin. Her work includes a unique pairing of engineering and public policy in the field of energy systems research. Melissa has worked for YarCom Inc. as an engineer and consultant in energy systems and systems design. She has previously worked for the Department of Energy and the White House Council on Environmental Quality for the Obama Administration. She is a graduate of the University of California at Davis, receiving a Bachelor’s of Science degree in Biological Systems Engineering. Melissa is also the author of the blog Global Energy Matters: Energy and Environment in Our Lives. As the nation moves toward a green energy future, it has found a leader in Texas. While Washington debates federal clean energy policies, the Lone Star State has taken up the reins in the renewable energy sphere. Should we be surprised that this iconic leader in our nation’s energy history is now uniquely positioned to lead us into our energy future? 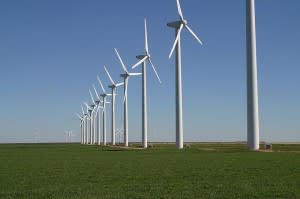 As a University of Texas at Austin graduate student and a woman with deep hill country roots I’m well acquainted with the state’s reputation as the home of big oil and gas. This image has been cultivated over the years through scenes with James Dean (Jett Rink) in Giant and Larry Hagman (J.R. Ewing) in Dallas. Truth-be-told, much of the economic development in the past 100 years in Texas can trace its roots back to 1901 when Spindletop came gushing in and the real-world Jetts and J.R.s found their strides. Today, Texas is the nation’s leader in total energy consumption, using about 12 percent of the country’s total energy. If Texas was a nation, it would rank seventh in the world for carbon dioxide emissions – just ahead of Canada and a smidgeon behind Germany. Texas boasts some of the largest petroleum refineries in the United States and the Houston area, including its aptly named Energy Corridor, is home to many oil and gas giants including Chevron, ConocoPhillips, Shell, BP America, and Exxon Mobil. The Lone Star State is undeniably a principal in the traditional energy industry and at the same time is uniquely positioning itself to be the nation’s leader in the green energy movement, particularly green electricity. Texas is not only rich in oil and gas reservoirs (good ole Texas Tea), but also has expansive renewable energy resources including solar and wind. Over the past decade, the state has cultivated its wind power industry with a set of progressive policies including a statewide renewable portfolio standard (RPS) that have driven Texas to be the nation’s leader in wind power. To date, almost 10 gigawatts (GW) of wind capacity have been installed within the state’s borders – enough to power almost 3 million homes. On February 28, 2010 Texas hit another impressive benchmark when it supplied a jaw-dropping 22% of its total electricity demand using wind energy. In doing so, it demonstrated the state’s ability to be a model for adding renewable electricity to the grid throughout the nation. Why Texas? What makes Texas unique? I’d like to offer up what I believe is the main reason – Texas’s electricity grid. In the continental United States, there are three grids (East, West and Texas) that serve as electricity pipelines to move electricity from power plants to our homes and businesses. The self-contained Texas grid (operated by ERCOT) is unique. It allows for regulation of transmission on a state basis, as intrastate activities are not overseen by the Federal Energy Regulatory Commissions (affectionately called FERC). This means that, if Texans want to test the limits on how much renewable energy they put on the grid or see how a renewable energy technology performs in a grid system, they can do so without Washington’s approval. In other words, Texas is like a 100+ million acre test lab that the entire nation can benefit from. A shining example of this is seen in the state’s capital. In Austin’s Mueller Development, the Pecan Street Project has taken on the role of America’s clean energy laboratory. This laboratory spans over 711 acres and is home to approximately 10,000 residents that live in 4,600 single-family, condo, or apartment homes. Twenty-five percent of these homes are reserved for families that qualify for affordable housing programs. Also on the site are Dell Children’s Hospital, a Home Depot, and a town center full of cafes and shops. Not exactly your traditional Bunsen burner and vent hood, but rather a huge outdoor dynamic laboratory for real time feedback and data collection. The Pecan Street Project is bringing together scientists (engineers, geologists, and chemists), politicians (from rural Republicans to urban Democrats), and Texas residents from all walks of life to see what we can achieve. This community, inspired by the smart grid concept, will test theories and technologies like advanced energy storage, real-time pricing, and an array of efficiency projects that not only target energy, but will also work to decrease water demand in the community. And the best part of this project is that the lessons we learn from this community will be shared with the rest of the nation. Texas has a rich energy history and appears to have equally high prospects for its energy future. Because of its unique position – with rich resources and independence in its grid – it is able to pursue exciting opportunities in the energy arena that the nation (and the world) will benefit from in the future.