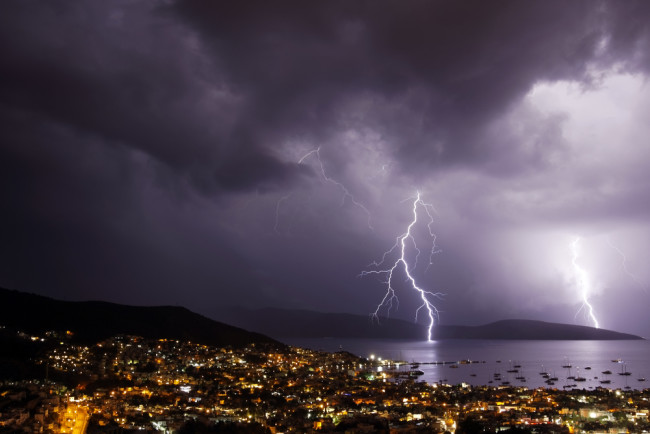 Every day on this planet, roughly 4 to 8 million bolts of electricity the width of a finger connect heaven to earth, discharging a current of 30,000 amperes and heating the air to 18,000 degrees Fahrenheit. It’s no wonder ancient cultures believed lightning was the chosen weaponry of pissed-off gods. You’ve probably seen the grizzly aftermath of a recent strike in Norway that killed 323 reindeer. Wired’s Megan Molteni published an excellent run-down on why centuries of Santa’s sleigh-pullers were doomed atop the Nordic permafrost:

“When lightning strikes, the current flows into the ground and outward, following the path of least resistance. In a warmer place, the electricity would penetrate deep into the soil and disperse quickly (this is called grounding). But in a place like the Hardangervidda, as the current runs into the soil and hits the permafrost layer, it instead spreads out along the surface of the soil, which is saturated with water from annual cycles of melting—and in this case, the massive rainstorms that generated the lightning strike. So the area that gets zapped is way bigger.”

Although lightning has long captured our attention, it wasn’t until the 18^th century that scientists started peeling back mythology to understand this frightful electrostatic display. In 1752, French scientists Thomas-Francois Dalibard and Georges-Louis Leclerc, successfully tangoed with lightning when a bolt struck a 40-foot metal pole that they had anchored in a wine bottle, confirming a hypothesis formulated by Benjamin Franklin. But more than 250 years after Dalibard and Leclerc’s experiment, scientists are still trying to answer fundamental questions about lightning. At the Florida Institute of Technology, Hamid Rassoul, a veteran space scientist and physics professor, founded the school’s Lightning Research Group to carry on the shocking investigations that started centuries ago. The following are a few of the nagging questions they are trying to answer.

How Does Lightning Begin?

Who hasn’t been shocked while reaching for a doorknob? The zap you feel is the result of passing the excess electrons clinging to your finger onto the positively charged doorknob. As your finger nears the knob, the voltage is so high that it causes the air to break down and act like a conductor. The dielectric breakdown of air is very predictable, it always occurs in an electric field that reaches 3 million volts per meter. It’s a fundamental quantity that’s been established in the lab, and tested over, and over, and over again.

The same should hold true for lightning, which is static electricity on a grand scale. But, for some reason, air breaks down inside a cloud when the electric field reaches just 2 million volts per meter, far weaker than expected. “That defies the laws of physics, or at least everything we know at this point,” says Rassoul. “Nature is managing to create a spark within an environment that doesn’t meet the same expectations in the lab.” Rassoul says ice particles in the cloud may interact in a way that initiates the spark sooner than expected, but it’s still unclear what gives lightning its final push. Understanding lightning initiation remains the so-called "Holy Grail" of lightning research. “It’s one of the biggest mysteries of lightning, and for the past 10 years we have been trying to answer that one,” he says.

How Does Lightning Travel?

Bolts from the blue originate in anvil clouds, but can travel vast distances. A single bolt, for example, can travel from a storm on one side of a mountain range and strike on the other side. Even after covering vast distances, they still pack a 130,000-amp punch four times higher than typical strikes — that’s what gives scientists fits. 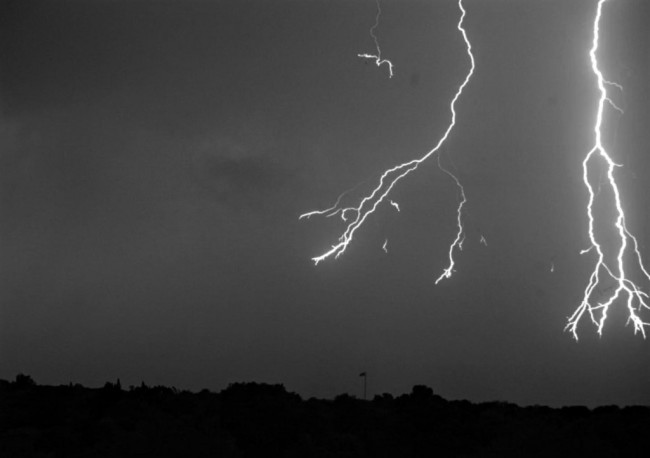 A lightning flash captured by a high-speed camera. (Credit: Geospace Physics Laboratory, Department of Physics and Space Sciences, Florida Institute of Technology) If you built a gun that could fire packets, or bullets, of electrons, you’d run into a problem with range. Say you set an apple on your friend’s head, and you wanted to peg it with an electron bullet from a distance 300 feet. By the time your bullet reached the apple, the electrons in your bullet would have scattered, dispersing the energy — remember, like charges repel each other. Bolts from the blue are positively charged, but as they travel some 10 miles through a cloud, they remain compact — about the width of a finger, and powerful. “We’re not sure how nature keeps similarly charged electrons together for miles in the atmosphere,” Rassoul says. He theorizes that lightning may travel in packets of electrons that generate a chain reaction of new packets along the way, like dominoes. Rassoul likens the theory to the concept of a generational star ship: The mission would launch from Earth with generation one, but once you reach, say, Proxima Centauri, it’s an entirely new group of people who reach the destination. “It’s beautiful on paper, but we don’t know how to show it in the lab,” says Rassoul.

Where Does It Strike?

“Twenty-seven percent of the time, depending on conditions, the shorter object is hit by lightning rather than the tall object,” says Rassoul. Consider that all-too-common myth about lightning officially dead. So what determines where lightning will strike, or what researchers call attachment? As you may have guessed, they’re still trying to figure that out, too.

Lightning begins with the development of a step leader, when excess electrons at the bottom of a storm cloud start racing through the air toward the ground. As they push down, the positive charge on Earth’s surface increases. The excess positive charges make their way up through buildings, cell towers — you — and into the air. These are called streamers. And when streamer and leader meet — bang! That much makes sense, but what isn’t clear is why a 6-foot-tall man can send a streamer higher into the air than a 100-foot cell tower, even if he’s standing right next to it. “Sometimes objects change electrical potential so much, they project their positive charge higher than a tower,” says Rassoul. “But why am I sending such a long streamer up there? Again, none of these questions have been answered.”

Eyes on the Skies

Figuring out the mechanisms of lightning could increase our predictive capabilities and improve safety — and these are just three of many lightning mysteries. To probe lightning’s secrets, Rassoul’s team is using ultra-slow-motion cameras, inducing strikes with rockets, and using theoretical models and simulations to arrive at new insights. Over the next several years, no doubt, work by the Florida Tech team and other scientists around the world will yield a better understanding of the power in our skies.