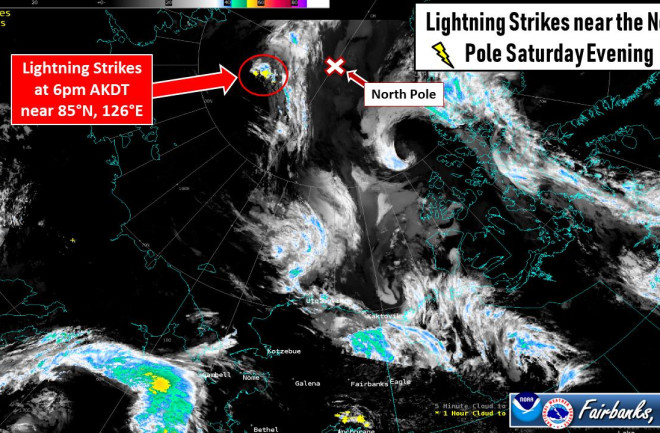 Lightning was detected in association with a thunderstorm located over the Arctic Ocean on Saturday, Aug. 11. (Source: National Weather Service)

We’re accustomed to lightning crackling within thunderstorms over relatively warm places like Florida — which happens to be the U.S. lightning champ.

But lightning near the North Pole? Well, that’s what happened on Saturday. And so now we get to add this to the list of extreme events that have befallen the Arctic this summer.

These include raging wildfires, dramatic losses of sea ice, and a heat-wave that caused about 55 billion tons of ice to melt from the Greenland Ice Sheet during a five day period in late July and early August.

The lightning within the Arctic thunderstorms was detected by a network of sensors a mere 300 miles from the North Pole between 4 p.m. and 6 p.m. Alaska Daylight Time, according to the National Weather Service in Fairbanks, AK.

The event was so unusual that it prompted a Tweet from the weather service saying it was one of the furthest north occurrences of lightning in the memory of Alaskan forecasters.

The developing thunderstorms were visible to the NOAA-20 satellite, as this animation shows:

For the animation, I created two views. One is a GeoColor view showing the scene in natural-looking tones. This shows thunderstorm clouds rising up above the lower cloud deck.

Also note the giant gray plume streaming off of Siberia. This is smoke from raging wildfires — smoke that has covered an area equivalent to about 60 percent of the contiguous United States.

The other view in the animation is in the infrared. This allows for an estimation of how high the convective clouds reached into the atmosphere. The blue colors indicate that the cloud tops punched up as high as about 12 kilometers, or 7.5 miles. That’s about the same as you’ll find in summertime thunderstorms in the U.S. Midwest.

Imagine that — thunderstorms not unlike those commonly seen in the U.S. heartland during summer blooming in Santa Land. Amazing.

Thunderstorms ordinarily form in masses of warm, moist, unstable air that rise in big updrafts during the summer. It all gets started as the sun heats the Earth’s surface.

Thunderstorms and their accompanying lightning are most common near the equator, which of course makes sense given that this region is bathed in direct sunlight. Also, as this map shows, lightning is more common over land than the ocean, and it becomes less common as you go north:

The color variations in the map above display the average annual number of lightning flashes per square kilometer, based on data from NASA satellite sensors between 1995 and 2005. In the U.S., Florida has the highest annual flash rate. (Credit: NOAA Science on a Sphere)

When you get up into the Arctic Ocean, lightning is nearly absent, which also makes sense given the relative dearth of heating from the sun.

I checked satellite imagery, and it looks like the Arctic Ocean thunderstorms actually occurred over an ice-covered area, not an open swath of water that could have added some warmth to the atmospheric stew immediately over it.

But there was open water about 150 miles away. And with sea ice extent running much lower than average this summer, open areas of water have been able to absorb considerable solar energy, resulting in sea surface temperatures much warmer than usual for August.

So it’s possible that the thunderstorms had their origins in an unusually warm and unstable airmass that formed farther south and got pushed toward the pole.