Native people around the world have relied on dark skies as a compass for thousands of years. But energy production, satellites and other nuisances are disrupting these sacred traditions. 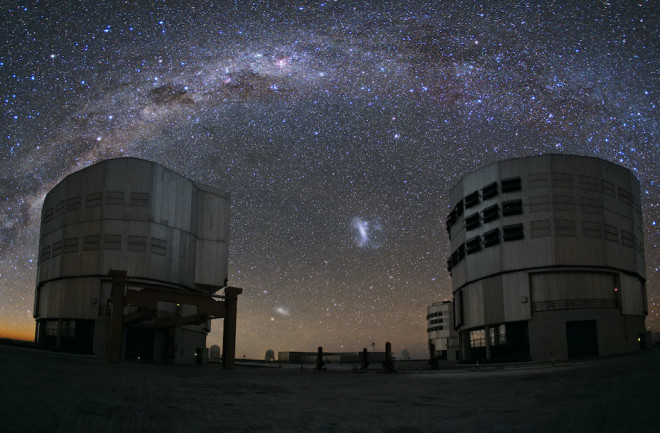 A view of the Emu in the Sky above the Paranal observatory in Chile (Credit: ESO/Y. Beletsky/Wikimedia Commons

As a crew member on a leg of the Moananuiākea Voyage through the Pacific, Ka’iu Kimura used nothing but the celestial sphere and the atmospheric and oceanic conditions to guide her — navigation methods that Indigenous groups throughout the region have used for thousands of years.

Kimura, a native of the island of Hawai’i, is the executive director of the ‘Imiloa Astronomy Center in the city of Hilo. In Hawai’i, several light ordinances protect the night sky to preserve local traditions and enable astronomical research.

Kimura feels that navigation practices anchor her to her ancestral home. “I think navigation today stands as a major contributor to the resurgence, the reconnection, the revitalization of our Hawai’ian identity,” Kimura says. “We all know we can jump on a plane and fly anywhere around the world, but it’s the fact that we choose to bring back this traditional knowledge. It's about holding on to our identity as a people of Hawai’i and of the Pacific.”

But light pollution increasingly threatens the viability of traditions that require a clear vision of the galaxies. More than 80 percent of the world lives under polluted skies, according to a 2016 Science Advances article.

This occurs in part due to energy production. Fracking increased light pollution by over 100 percent in rural U.S. areas between 2000 and 2012, according to a May 2021 paper in Resource and Energy Economics.

Inventions like satellite swarms, along with space missions’ lingering debris, also jeopardize these views around the globe: Satellites now overcrowd the lower Earth orbit, and their artificial light interferes with stargazing activities worldwide. This dilemma “will fundamentally change astronomical observing” according to a 2020 report from the American Astronomical Society and the National Science Foundation.

The sky can be compared to a library in which each star represents a book, says Krystal De Napoli, an astrophysics graduate student at Monash University in Australia who has researched the cultural impacts of light pollution. “And if we start to cover up and lose sight of those books, we lose our reference points, we lose that link and our information,” she says.

Indigenous Australians, who belong to one of the Earth’s oldest civilizations, have looked to the sky for tens of thousands of years to form knowledge systems about critical subjects like animal behavior and plants’ medicinal properties, according to De Napoli. More broadly, Indigenous science is often encoded into oral traditions or stories that serve as memory devices — meaning that important knowledge is commonly tied to the celestial sphere.

Western culture's constellations usually link bright stars to trace images in the sky. Yet Indigenous Australian traditions center dark sky constellations that consist of patches of gas and dust that obscure light, says Duane Hamacher, a cultural astronomer at the University of Melbourne who has previously collaborated with De Napoli. That's where the emu in the sky lives.

This constellation describes its earthly counterpart’s behavior and provides information on food and water sources for both humans and emus. Other constellations relate to plant harvests, animal life cycles and weather prediction.

Now, a group of scientists and other space stakeholders is working to preserve these stories. The Satellite Communications (SATCON) workshop, which is organized by the National Science Foundation and the American Astronomical Society, aims to mitigate satellites’ effects on our sky-viewing experiences.

Aparna Venkatesan, a cosmologist at the University of San Francisco, served as a co-chair at the 2021 event. While she and her colleagues sought to consult Indigenous scientists on sustainable space practices, they acknowledged that it wasn’t an all-encompassing discussion. “Everyone who spoke at the meeting was very clear that they were not speaking for their whole tribe, or for all sovereign tribes and nations or just the U.S. alone,” says Venkatesan.

She sees space as an ancestral global commons, as described in her 2020 article published in Nature Astronomy. But the task of regulating space is a complicated one. Astronomers and entrepreneurs should be careful not to appropriate Indigenous perspectives to serve their bottom line, she adds.

What’s more, colonial ideas are pervasive in the language we use to describe space. When they're conceptualized as conquering the “final frontier,” space missions mark yet another chapter in the story of Western expansionism. “I think a lot of it reifies and solidifies this imagined past, this manifest destiny,” says Alvin Harvey, a member of the Navajo nation and a second-year astrophysics PhD student at MIT.

To justify their expansion, satellite companies have claimed that Indigenous groups want digital broadband connections, she explains, especially as the pandemic has shifted work increasingly online. But Venkatesan urges the astronomy field to avoid this mistake and respect individual native communities’ unique needs.

“So much of astronomy is conducted on Indigenous lands or through land-grant universities, but I think we should be careful to not propagate the system that we are working in,” says Venkatesan. “We are all benefiting from a system that has delivered colonization on the ground. So if we really want to not do that in space, we need to really be inclusive of all perspectives, including bottom lines that may not suit academia or astronomy.”

Beyond environmental impacts, governing space involves a myriad of considerations, says James Lowenthal, a Smith College astronomy professor and SATCON 2 co-chair. Take politics, for example: The 1967 Outer Space Treaty — which was signed by over 100 nations, including the U.S., India and Brazil — also views space as a commons. But Lowenthal notes that the treaty was written at a time when nearly all satellites were operated exclusively by governments. Now, the Outer Space Treaty doesn't have the teeth to regulate or restrict the increasingly commercialized Milky Way (and beyond).

Satellite companies currently need permission from the Federal Communication Commission (FCC) to launch equipment. But the FCC does not incorporate the National Environmental Protection Act (NEPA) into its review and authorization process, a policy decision made decades ago. This means that as satellite swarms proliferate, they are not subjected to environmental protection regulation that would quantify their impact on light pollution.

As a federal agency, NASA must apply NEPA and issues an environmental impact statement following launches. Applying similar regulation to private operations could offer one strategy to mitigate the adverse effects of commercial satellites.

Meanwhile, Indigenous engineers like Harvey envision a new kind of space exploration altogether. He’s currently working to support Indigenous groups in starting their own space programs, which would involve collaboration with the same government agencies that have long harmed these communities.

Harvey has joined forces with MIT’s Space Enabled lab, where researchers harness technology like environmental modeling to advance sustainability with an anti-racist and anti-colonial mindset. “[Through the lab] we were able to put on a series of seminars this year that brought in these Indigenous scholars to really talk about these types of questions,” he says. “I think that type of capacity-building was really important,”

Ultimately, without Indigenous consultation and decision-making, astronomers and government officials will run the risk of falling into the same patterns of historical colonial violence. “I think that trauma is very much alive. It's especially potent when you begin to talk about something that's really sacred, like the moon or stars,” Harvey says. “Is this the type of future that we want to establish in space? And do we want to take these historical wrongs and export them up into our lunar or martian future, essentially?”