Let's Save Science! Inside the Innovation 2008 Science Policy Conference

For the past few weeks, we've been posting thoughts from some of the biggest names in science regarding what the next U.S. president needs to do to promote/engender/rescue science in this country. And luckily, we're not the only ones hammering away at this issue. Last week, scientists, business leaders, and policymakers gathered in Minnesota to discuss the future of science at the Innovation 2008 Conference. Here's a report on what went down, from guest blogger and conference participant Darlene Cavalier.

"Everybody supports science, motherhood and apple pie, but when it comes to funding, it's a different story," IEEE-USA President Russ Lefevre told a national audience last week at Innovation 2008: Renewing America through Smarter Science & Technology Policy.

The event was co-hosted by Science Debate 2008 and the Center for Science, Technology and Public Policy at the University of Minnesota's Humphrey Institute. It presented public sessions on critical issues facing the next United States president, including: Innovation and Competitiveness; Renewing Science, Technology, Engineering and Math Education; Health Science Policy; Integrating Science and Technology in America’s Artistic and Civic Culture; and Energy Security and Sustainability. “Energy and broadband are two critical fields where more attention is warranted,” Lefevre stressed. So what’s the sharpest thorn in these areas? Access.

The first step, the experts agreed, is to create Smart Grid technologies that can help manage the delivery of electricity better, and a national transmission grid to help open access to wind and solar resources. Efforts are already underway to increase access to broadband. The recent market bailout bill authorized funds for the first-ever census of the gaps in U.S. broadband coverage. The U.S. has dropped from fourth place in broadband adoption to 15th among 30 developed nations, and we pay twice as much for broadband service that's six times slower than Japan’s. Several participants suggested that one of the top priorities of the new presidential administration should be to fully fund the America Competes Act, which calls for doubling the budgets of the National Science Foundation, the Department of Energy's Office of Science, the National Institutes of Standards and Technology, and other federal research departments. Greatly increased funding for research is unlikely, however, as "the broader budget choices policymakers make will constrain future investments in R&D," said Kei Koizumi from the American Association for the Advancement of Science. "FY 2009 has started, but only three of nine federal departments [Dept. of Defense, Dept. of Homeland Security, and the Veterans Administration] have their final 2009 budgets.” To see more trends in federal funding, click here. All this funding is even less likely to happen without public support. Science writer Chris Mooney moderated a panel discussion on Science and Culture, in which panelists (including this blogger) presented creative approaches to engaging the public in science. The list included: Blending science with the arts, encouraging average citizens to participate in research projects, and creating mechanisms for scientists to communicate directly with the public. 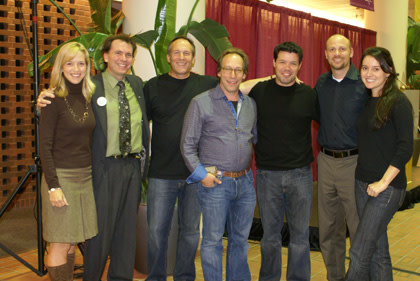