Latest Update: Strong El Niño Persists, And It's Likely to Continue Into Spring. Here's Why. 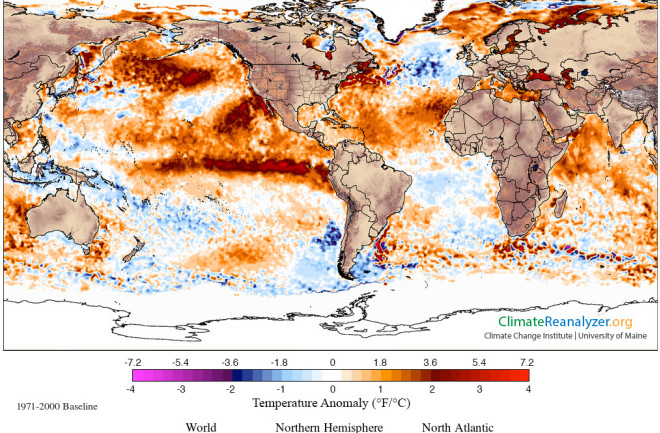 A spear of abnormally warm water extending along the equator off the coast of South America shows that the strong El Niño of 2015 continues. Even as El Niño has strengthened over the past few months, it has always been possible that it would stall. But the latest report, released on September 29 by the Australian Bureau of Meteorology, shows that it is still going strong:

The tropical Pacific ocean and atmosphere are reinforcing each other, maintaining a strong El Niño that is likely to persist into early 2016. Tropical Pacific sea surface temperatures are more than 2 °C above average, exceeding El Niño thresholds by well over 1 °C, and at levels not seen since the 1997–98 event. In the atmosphere, tropical cloudiness has shifted east, trade winds have been consistently weaker than normal, and the Southern Oscillation Index (SOI) is strongly negative.

That 1997-1998 event was a monster. If the current El Niño continues on its current course, it may well surpass it. And as I'm sure you know, this would have ripple effects far from the tropical Pacific Ocean, where El Niño itself resides. These include, of course, the potential for above normal precipitation during winter in parts of California and across the southern tier of the United States. That could help relieve the brutal drought in California, but heavy precipitation could also bring devastating mudslides, as occurred in the winter of 1997 and 1998. The National Oceanic and Atmospheric Administration has put together a good summary of El Niño's impacts in North America and elsewhere in the world. You can find it here. In its report, the Australian Bureau of Meteorology notes that a strong El Niño has persisted because both the ocean and atmosphere in the tropical Pacific have been reinforcing each other. How so? First, there are those trade winds:

The purple shading shows where trade winds tended to blow anomalously from west to east in the tropical Pacific between Aug. 30 and Sept. 28, 2015. (Source: Climate Prediction Center) Ordinarily, the winds blow along the equator in the tropical Pacific Ocean from east to west. But during an El Niño, they slacken, and sometimes even reverse direction. As the graphic above shows, that's exactly what has happened. Had it not, El Niño could have stalled. That's because of the atmospheric-oceanic connection mentioned by the Australian report. When the trade winds are blowing in the normal direction, they tend to corral warm oceanic surface waters in the western tropical Pacific, over by New Guinea and Indonesia. Those warm waters help fuel abundant thunderstorm activity in that region. But when the trade winds slacken, or even reverse, that warm surface water sloshes toward South America on the eastern side of the Pacific. And that's why you see that bright red and orange spear of very warm water extending off the coast of South America in the map at the top of this post.

Animation showing the evolution of sea surface temperature anomalies in the tropical Pacific. (Source: Climate Prediction Center) You can also see it in this animation. This is a characteristic signature of El Niño. The unusually warm water is not just at the surface. It extends quite deep:

Temperature anomalies at depth in the tropical Pacific. (Source: Climate Prediction Center) In this graphic, you're essentially looking at a cross-section of the tropical Pacific Ocean along the equator. The vertical axis shows depth, down to 450 meters. And the horizontal axis shows longitude: west is toward the left, and east toward the right. That big blob of yellow, orange and red is indicative of warmer than normal water extending to great depth from about the International Dateline to South America in the east, mirroring the spear of warmer than normal surface waters. The migration of all that warm water to the east brings with it a shift in thunderstorm activity:

Areas with red shading in this map show where storminess is reduced, whereas blue shading shows where it is enhanced. (Source: Climate Prediction Center) This graphic depicts anomalies in what's known as outgoing longwave radiation, or OLR. Areas in red show where the amount of energy radiated upward from Earth's surface and escaping into space is greater than normal. That happens when there are fewer clouds — meaning less storminess — to block that energy. Conversely, the blue shading shows where less energy is escaping into space than normal, thanks to increased cloudiness from storms. The anomalous storminess is most intense along the equator at the International Dateline. As these graphics show, the ocean and atmosphere really are in close communication right now. Were it not so, we might expect El Niño to peter out. I would't bet on that now.