Even so, there's still better than a 50/50 chance that this weather-influencing phenomenon will emerge during fall and winter 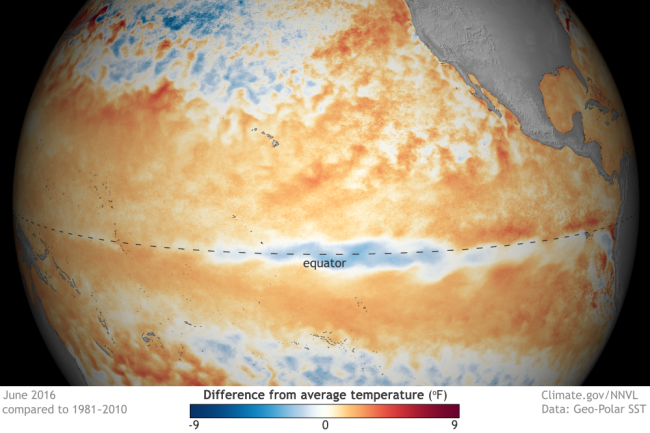 Sea surface temperature in June 2016 compared to the 1981-2010 average. The blue tones indicative of cooling in the central tropical Pacific suggest La Niña may develop later this year. (Source: NOAA Climate.gov map by Dan Pisut, based on GEO-Polar data.) In the latest forecast, La Niña — the cool opposite to El Niño — is still favored to develop by winter. But the odds have dropped over the past month. The U.S. Climate Prediction Center now pegs La Niña's chances of developing at 55 to 60 percent. That's down from odds of 75 percent just a month ago. If it does develop, it is likely to be a relatively modest one, according to the CPC.

La Niña's typical impacts during December, January and February. (Source: Climate.gov) Whether or not La Niña takes over from the now defunct El Niño of 2015 and 2016 is not just an academic question. These two sides of the El Niño-Southern Oscillation, or ENSO, have powerful effects on our weather. Click on the map at right to see what the odds favor in terms of winter impacts, should La Niña develop as predicted. Whether or not La Niña takes hold could also influence California's epic drought. That's because La Niña tends to be associated with drying in California — a trend that can persist, and deepen, for years afterward.

SEE ALSO: If La Niña follows the current super El Niño, it will probably be bad news for drought-plagued California

During a La Niña, surface waters along the equator in the eastern and central Pacific Ocean tend to cool, the opposite of what happens during an El Niño. You can see hints of that cooling in the image at the top of this post. This drop in temperatures is fed by a supply of cool water welling up from the depths. And right now, there is plenty of that available: 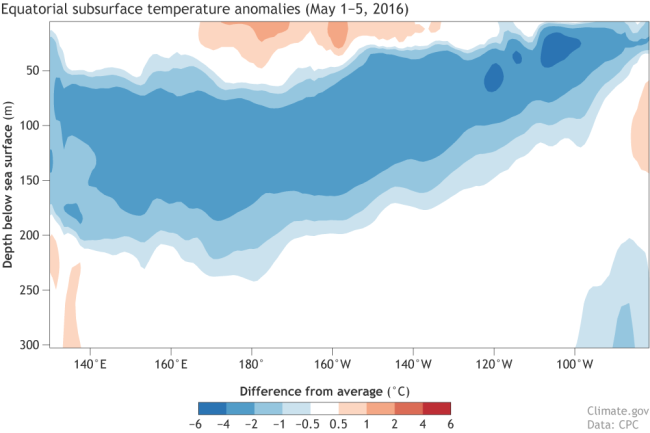 This cross-section of the tropical Pacific ocean along the equator shows how water temperature down to a depth of 300 meters varied from average between July 5th and 9th 2016. The blue blob shows a massive volume of relatively cool water rising to the surface. (Source: Climate.gov) The blue blob in the cross-sectional graphic above shows a massive volume of relatively cool water extending down to almost 250 meters in depth. It is just surfacing in the east (right), influencing surface waters there. This is exactly what you'd expect with a La Niña. So why isn't the forecast a slam dunk for La Niña? Anthony Barnston, chief forecaster with the International Research Institute for Climate and Society at Columbia University, has an excellent explanation over at the ENSO blog. So for a wealth of nitty gritty details, make sure to check out his post. The long and short of it is this: The ocean seems to be talking, but the atmosphere doesn't seem to be listening very well — at least not yet. For La Niña really to take hold, cooling of equatorial Pacific surface waters has to begin influencing what happens in the atmosphere above it. Typically, that means a strengthening of the trade winds that usually blow along the equator from east to west. In turn, that tends to enhance upwelling of cool water from the depths in the eastern Pacific, which strengthens the trade winds even more, which causes even more cool upwelling — all in a positive feedback loop that can push the whole system into an unambiguous La Niña. Except right now, the trade winds haven't seemed to notice what's happening at the ocean surface below them. They've been blowing from east to west at about average strength. The upshot: Conditions don't look quite as conducive to La Niña as they did last month. But all of that could change once again — especially if the trade winds wake up.