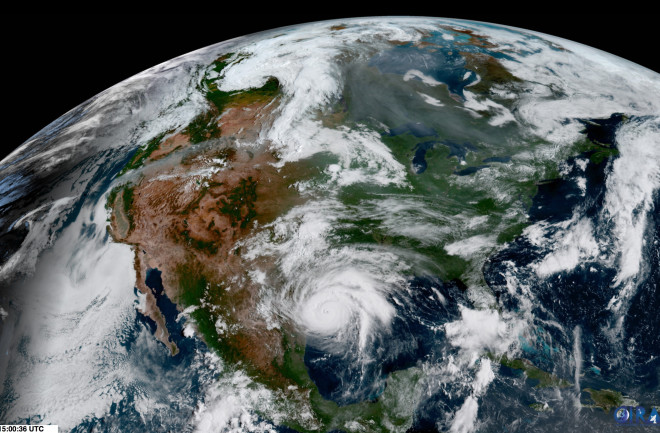 North America on Aug. 25, 2017, as seen by the GOES-16 weather satellite. Hurricane Harvey is seen along the Texas Gulf Coast toward the bottom middle of the image. And above the Great Lakes, smoke from wildfires is drifting across a large swath of Canada. (Source: RAMMB/SLIDER) I'm a bit late to this story, but it's significant enough that I didn't want to let it pass by without posting something about it. The long and short of it is this: 2017 truly was a horrific year for weather and climate disasters, both in the United States and the world as a whole. Floods, tornadoes, hurricanes, drought, fires and freezes in the United States claimed at least 362 lives and injured many more in 2017. In total, the nation experienced 16 weather and climate disasters with losses exceeding $1 billion, tying 2011 for most in a single year, according to an analysis by the National Oceanic and Atmospheric Administration. Total costs from these disasters amounted to $306 billion. That set a new U.S. annual record, beating out 2005, the year of hurricanes Katrina, Wilma and Rita. Since 1980, the United States has sustained 219 weather and climate disasters with costs reaching or exceeding $1 billion each. Collectively, these 219 events have cost the country more $1.5 trillion. Globally, losses from weather and climate disasters also set a new record in 2017, according to Munich Re, one of the world's leading reinsurance companies. Insured losses were almost three times higher than the average of $49 billion. The U.S. share of global losses in 2017 was particularly high: half of the global total, as compared to the long-term average of 32 percent. "For me, a key point is that some of the catastrophic events, such as the series of three extremely damaging hurricanes, or the very severe flooding in South Asia after extraordinarily heavy monsoon rains, are giving us a foretaste of what is to come," says Torsten Jeworrek, Munich Re Board member responsible for global reinsurance business. "Because even though individual events cannot be directly traced to climate change, our experts expect such extreme weather to occur more often in future.” According to NOAA's analysis, some of the more noteworthy weather and climate disasters in the United States included . . .

If you're wondering about about the meaning of "weather and climate disasters," I did too. So I asked Derek "Deke" Arndt, head of the Monitoring Branch of NOAA's National Centers for Environmental Information. Here is his response:

We include weather and climate disasters together, because some of the events can be sufficiently long term to be called climate; by their multi-month or seasonal nature, they fit into the climate variability timescale. Drought, in particular, can occur over climate timescales, and also seasonal recurring wildfire. Even weather events like hurricanes have elements of longer-term climate change in their impact. Sea level rise that enhances storm surge is a good example of this.

NOAA's analysis also found that 2017 in the United States was the third warmest year in 123 years of record-keeping. That means that the five warmest years on record for the country all have occurred since 2006. And for the third consecutive year, every state across the contiguous United States and Alaska experienced above-average annual temperatures.