Land of Enchantment, Drought and Fire 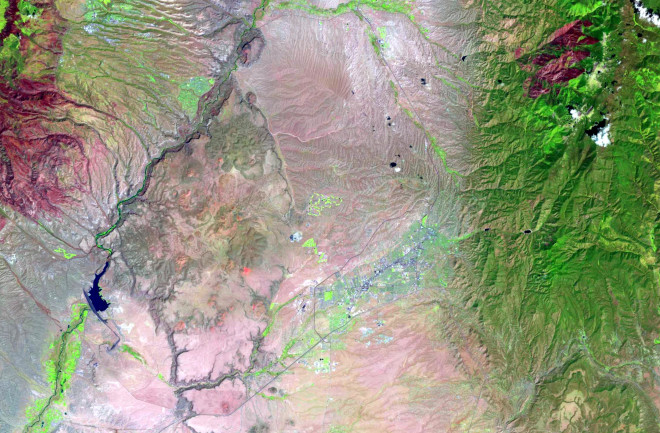 A false color Landsat image of Santa Fe and environs, including two major burn scars depicted in bright red. Santa Fe, New Mexico's capital, is slight below and to the right of the middle of the picture. (Image: USGS) I've skipped town for spring break, heading south away from a big snowstorm that is currently dumping on my home town of Niwot, Colorado. And where else to go to get away from precipitation? New Mexico, the Land of Enchantment, of course — which is currently gripped in a severe drought. The Landsat image above shows Santa Fe, flanked to the northeast and northwest by giant wildfire scars. They are depicted in the false color image in vermillion tones. Somehow, that seems appropriate. The fire scar to the northeast of the city is from the Pacheco Canyon Fire, which burned more than 10,000 acres in the summer of 2011. The scar to the northwest is from the much bigger Las Conchas Fire, which consumed 156,593 acres that same summer — an area more than five times bigger than the city of Santa Fe itself.  With a thin snowpack in the mountains — source of the city's drinking water — and a less than encouraging climatic outlook for the coming months, water managers are preparing for a third straight year of drought. And I don't even want to think about what kind of fire season these folks are in store for. For now, I'm just grateful to have escaped the snowstorm that is set to drop up to a foot of snow where I live. And in a day or so, I'll be pay a visit to Ghost Ranch, where Georgia O'Keeffe lived and painted beginning in the 1930s. While I'm there, I'm planning to do some photography. If I come up with anything worth sharing, I'll post it here soon.