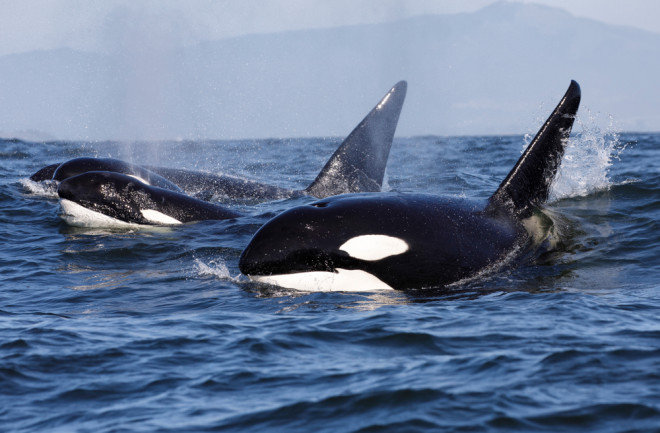 People really like killer whales — from the popularity of whale watching and movies like “Free Willy,” to the recent viral tale of a killer whale carrying its dead calf for over two weeks off the coast of Vancouver, British Columbia.

That makes the possible population collapse of these iconic creatures even more distressing.

A paper in the Sept. 28 issue of Science says killer whales are at great risk, but not from climate change, loss of habitat or loss of their prey. It will be due to something that sounds very 1970s – PCB, or polychlorinated biphenyl.

PCB Passed On Through Generations

PCBs are human-made chemicals used for making plastics, electronics, lubricants, heat transformers and other materials and technology. In the late 1970s, studies showed the harmful effects of PCB on humans and on wildlife, such as birds, otters and seals.

In 1979, the U.S. Environmental Protection Agency banned the chemicals. European agencies followed suit over the next decade.

But PCB is still being produced, and marine animals high on the food chain, like killer whales and sharks, are being harmed most by it. According to a 2017 paper, killer whale populations off the coast of the most industrialized parts of Europe are close to extinction.

In addition, PCBs are easily transmitted from mother to calf. “We are very worried about reproductive effects where these high levels of PCBs can impact the survival of killer whale offspring,” says Desforges, a postdoc at Aarhus University in Denmark.

Bleak Forecast for Some Whale Populations

Desforges and his team created a risk-assessment model to forecast the effects of PCB on killer whales over the next 100 years. It’s based on measurements of the chemicals in 351 killer whales from oceans around the world. The model simulates the chemical accumulation in whales and the level inherited by calves.

The North Pacific and North Atlantic oceans, which includes the coasts of Alaska, Iceland and Norway, have the lowest PCB risk. But the model suggests levels will continue to increase in those waters.

The highest risk is in parts of the Pacific and Atlantic oceans near Brazil, Hawaii, Japan, the Strait of Gibraltar and the United Kingdom, to name a few. These areas are near industrialized regions, where the chemicals were used a lot before being banned or, in some cases, are still being used.

Diet also impacts PCB concentrations in the animals. In the Northern Pacific, Bigg’s killer whales prey on marine mammals, tuna and sharks, and they have sky-high PCB levels, the paper says. This is probably because the larger prey carry more PCB and the chemicals are transferred to the predator. In the same Northern Pacific waters, killer whales preying on fish low in the food chain have lower PCB levels.

Desforges says researchers need to study where PCBs are entering the environment, identify contaminated hotspots and clean them up. Also, more studies on the effects of the chemicals on killer whales are needed.

“Addressing the PCB issue will definitely not be straightforward because PCBs are so widespread and thus a global problem,” says Desforges.