This weekend I have a profile on Robert Kennedy Jr. in the Washington Post magazine. During our numerous conversations over the phone and in person, I found him to be candid, self-deprecating, and unshakably confident in his belief that thimerosal was a dangerous ingredient that should not be in vaccines. (It was phased out of U.S. pediatric vaccines in the early 2000s, but it remains in some flu vaccines.) Today, no leading public health advocate shares Kennedy's view. So why has he maintained his position when scientific authorities, including the CDC, the FDA, World Health Organization, Institute of Medicine, have concluded that thimerosal is safe in trace amounts? "Because I looked at the science," he said to me. The evidence that convinced him is compiled in a soon-to-be published book called, "Thimerosal: Let the Science Speak." I promised Kennedy I would read the book and tell him where he got it wrong, if I came to that conclusion. Before I attempt to do that (in part 2 of this post), let me back up a bit. Last year, I characterized Kennedy as anti-science. I regret this and apologize for using such language. I have since come to believe that labeling people as "anti-science" is lazy and unfair--no matter what the issue. If we were to apply the label in a consistent manner, then there would be a large anti-science tent, as I have said before. I think Kennedy is misguided in his relentless thimerosal campaign--especially in the way he has gone about it--which is outlined in my Washington Post story. That said, I think Kennedy is well-meaning and sincere in his beliefs. He is what I would consider a flawed messenger, someone who inflames passions with irresponsible, over-heated rhetoric, which undermines whatever legitimate points he might have. Kennedy knows that his combative, prosecutorial style is unhelpful to his cause. (He is a lawyer, after all.) So in recent years he recruited several medical professionals to his campaign. One of them is Mark Hyman, a physician, best-selling author, and doctor to the Clintons. Hyman is likable and diplomatic. He is also untainted by the vaccine wars, in the way Kennedy is. Hyman became a major collaborator on Kennedy's book, smoothing out its sharp language and shaping it into what he and Kennedy believe is a sober, scientific discussion of thimerosal. In his preface, Hyman attempts to pre-empt the anticipated criticism:

Critics of this book will quickly polarize the debate. It is easy to oversimplify the issue of Thimerosal into pro-vaccine or anti-vaccine. Or to confuse this issue by debating whether Thimerosal causes autism, which has not been definitively proven. This is unfortunate, and detracts from a much simpler set of questions that are ultimately the subject of this scientifically dense book. There is no debate that mercury in any form is toxic. Scientists may debate the differences in toxicity between different forms of mercury such as ethlymercury (Thimerosal) or methlmecury (from fish). But all would agree that mercury is a potent neurotoxin. There is also no debate about the dramatic increased prevalence of neurodevelopmental disorders over the last few decades, including learning disabilities, attention deficit disorders and autism.

These three paragraphs follow in the exact order presented above. I'm highlighting them because they encapsulate a contradictory argument that runs through the book. In the first paragraph, Hyman is telling readers not to be sidetracked by a quarrelsome debate: unproven claims of a connection between thimerosal and autism. The problem with that enreaty is that the thimerosal issue is overwhelmingly colored by such claims, because that is how autism advocates framed the debate over a decade ago. They poisoned the well. Now Hyman wants us to drink from a different well. (Good luck with that.) So he says in the second paragraph that readers should focus instead on several key points: mercury is a known toxin and that it's meaningless to distinguish between the different forms of mercury. Okay, we've had that debate before, but I'm open to revisiting it if there's new data, studies or other legitimate evidence that never saw the light of day. But wait, in the third paragraph, Hyman ignores his own advice not to get distracted when he mentions that, oh by the way, there's been a notable uptick in all these neurodevelopmental disorders, including, autism. What!? He just warned in the first paragraph not to "confuse" the thimerosal debate with such asserted linkages. To recap, Hyman is imploring us to avoid the autism quagmire, stay focused on mercury's toxicity, but keep in mind that autism rates have shot up in recent decades. This tortured logic and inconsistency sets the tone for what is to come in the book. The book I read made a case that thimerosal is not a safe vaccine ingredient, despite assurances otherwise by multiple scientific and public health bodies. Kennedy and Hyman build their case by presenting numerous studies that suggest ethlymercury--the compound in thimerosal--is harmful with exposure to repeated dosages. These studies, they assert, "show that while ethylmercury quickly clears the blood, it is not excreted from the body and is instead preferentially deposited and sequestered in organs and tissues including the brain." So what does this amount to? Here's what they write in the executive summary:

This increased exposure to mercury via vaccines coincided closely with the increased case reports of neurodevelopmental disorders, including a dramatic increase in autism spectrum disorder (ASD) cases and a rise in attention deficit disorder (ADHD).

What's the point in asking people to drink from a new well if you're just going to poison that one, too? In the second part of this post, appearing tomorrow, I'll more specifically address the core arguments and evidence laid out in the published book. Meanwhile, it's worth pointing out that the furies in the vaccines = autism community are incensed at Kennedy and circulating an early draft of his book. This is what happens when you stir the toxic ingredients in a controversial pot, as Kennedy has too often done with an emotional, complicated issue. 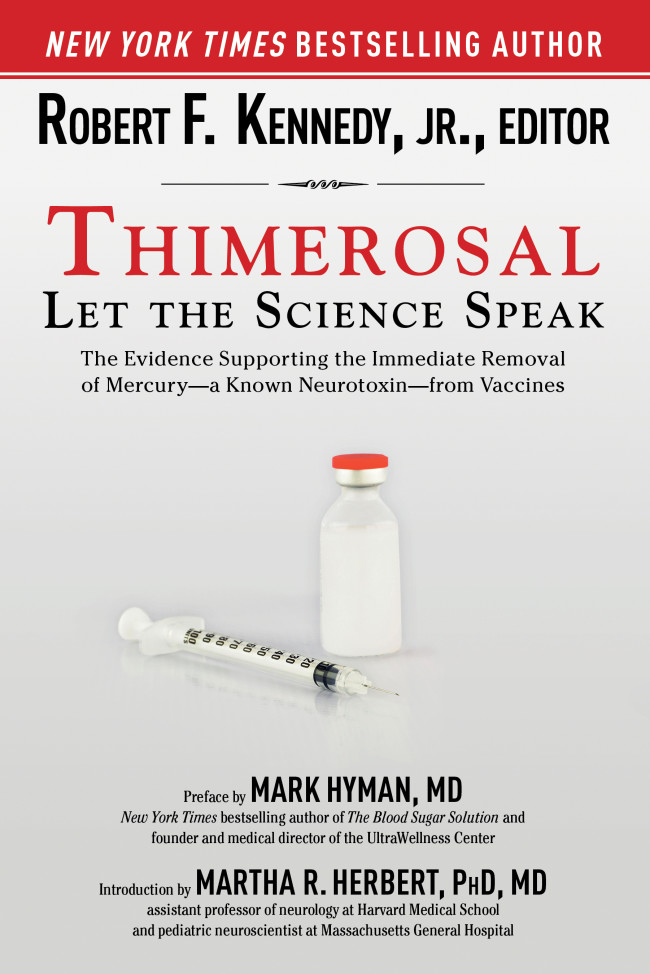