Just How Environmentally Friendly Is Thrifting?

The answer is very — but there are ways we can help make thrift stores greener. 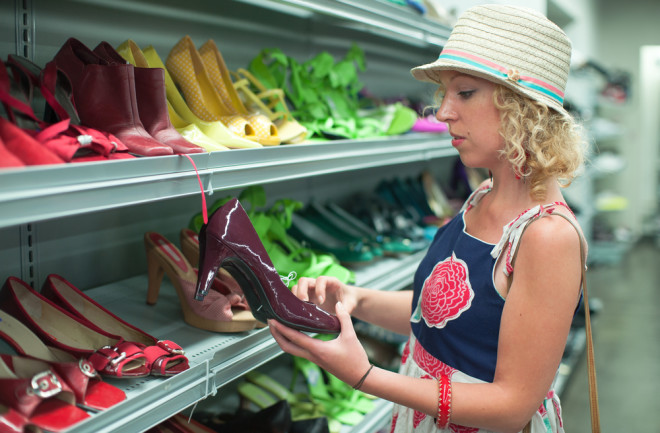 Making secondhand purchases is naturally eco-friendly: You're giving new life to something ordinarily destined for the landfill — and likely saving some money and supporting a good cause to boot.

And while thrift stores remain a solid part of the solution to our trash problems, they are struggling in an era of fast fashion — where a cheap price tag often carries more weight with consumers than quality materials.

“There is way too much clothing being produced, the length of time that consumers are wearing clothes has fallen dramatically, and as a result there’s a flood of unwanted clothes moving through the secondhand clothing system,” says  Elizabeth Cline, journalist and author of Overdressed: The Shockingly High Cost of Cheap Fashion and The Conscious Closet: A Revolutionary Guide to Looking Good While Doing Good. “The thrift store system we have today was set up at a time in history when clothes were more rarefied and valued and that system will need a rethink and a reset in the era of fast fashion. The system is just breaking down at this point.” Maresa Ponitch, who owns and operates Dusty Rose Vintage in Brooklyn, New York has experience working in textile recycling facilities and has witnessed the vast amounts of clothing and other household items that pour in.

“A huge percentage of what thrift stores bring in they don’t put on the shop floor,” says Ponitch. “(A lot of it) ends up being sent somewhere else for someone else to deal with.”

The Afterlife of Our Stuff

At recycling facilities, workers aim to re-sell the clothing as is, or repurpose it into things like rags. As a last resort the clothing is shredded in machines and returned to fibers that can be used to make new products such as upholstery and home installation. Ponitch says synthetic fabrics would often gum up these machines and the recycling facilities are piled high with so much stuff they feel like a landfill. Her experience has made her a more discerning consumer.

“I’m the worst person to go shopping with,” says Ponitch. “I know what (the items) are going to look like in the afterlife.” With that in mind, any item that can be resold as-is is generally the best win for the planet. For example, in a study carried out by Green Story and commissioned by online secondhand retailer thredUp, a dress purchased secondhand from the thredUp site saves 21.4 pounds of carbon dioxide emissions. A handbag reportedly spares even more with a 267 pounds of carbon emissions savings compared to buying new.

In a 2019 report by Green Story, which was also commissioned by thredUp, the company analyzed the various life cycle processes involved in each type of fabric content sold from thredUp's inventory, along with other environmental impacts. The breakdown of where unsellable items wind up is listed as follows with 90 percent sold in aftermarket, 3 percent for industrial use, 2 percent for recycling and the remaining 5 percent headed for the landfill or incineration.

That data is generally hard to come by from most thrift stores. During the reporting for this story, Salvation Army simply said their percentage breakdowns varied per location and Goodwill never responded to this publication's requests for comment.

However, the 5 percent statistic is consistent with the secondhand industry association claim which indicates that this clothing is largely only trashed because it is moldy, wet or otherwise soiled.

Cline suspects, though, that the actual amount is higher due to the low-quality, synthetic clothing barreling through our system. In addition, when clothing is shipped for re-sale overseas a growing percentage is getting trashed there as well, noted Cline though the data is similarly limited.

“What we do know is most of the clothing landfilled in the United States is getting there because of consumers throwing it directly in the garbage in their households or brands trashing samples and unsold goods,” says Cline. “The thrift store industry by contrast makes every effort to find a market for the clothes they get. It’s their business to resell clothing and landfilling is not the ideal outcome.”

How Can We Help Thrift Stores?

One way is to ensure that we're donating quality items. However, don't be afraid to include some more worn items too with the idea that they'll ultimately be recycled.

“I think people judge their clothing pretty harshly,” added Jessica Schreiber, a former City of New York Department of Sanitation Employee and founder and chief executive officer of FABSCRAP, INC. For example, if it's an otherwise high-quality piece of clothing but it's just missing a button, Schreiber advises donors to avoid placing it in the trash pile.

Ponitch suggests that well-known stores like Goodwill and Salvation Army are likely more equipped to handle items in need of recycling compared to smaller organizations because they are guaranteed to have relationships with textile recyclers. Finally, give your items a little extra TLC before you part with them.

“Take a few extra minutes to make sure that there's no lint, hair, tissues, receipts, coins, etc. in your donations,” says Cline. “Tie, buckle or tape shoes together so they stay paired up and don't get separated. Just think of your item of clothing in competition with millions of others to get another go-around, so you have to make sure your donation is really snazzy and looks its best.”

Those are the little ways we can help but, of course, the big changes will come from the top with brands needing to move back toward prioritizing durability and making items easier to recycle. Better recycling technology is needed too though steps are being made in that direction, noted Cline. For example, the Seattle startup Evrnu is transforming cotton clothing into rayon yarn which can be recycled multiple times, says Cline. Also, better legislation is needed in order to hold brands more responsible for the environmental impact which is starting to gain traction in Europe, she added.

Sometimes it's best to think before you shop in the first place. Especially if it's not from a secondhand outlet

“Waste never goes away,” says Cline. “So if you're really concerned about your donations getting landfilled, that might be a sign you're overconsuming.