Is the Gulf Oil Spill Headed for Florida & North Carolina? 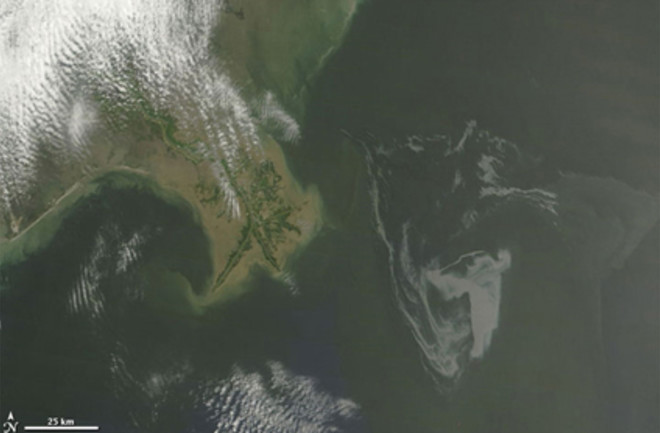 The weather changed yesterday and kept the Gulf of Mexico oil spill off the Louisiana coast for at least another day. But while we previously reported on the damage that oil could do if it makes landfall, there could also be disastrous consequences if the oil heads too far in the other direction, out to sea. Not far south of the oil slick's present location lies the Gulf loop current, which heads north from Mexico's Yucatan Peninsula, makes a sharp turn in the middle of the Gulf and then heads for the tip of Florida. Eventually, water caught in the current can get pushed around to Florida and then connect to the Gulf Stream current.

Oceanographer George Maul worries that the current could push the oil slick right through the Florida Keys and its 6,000 coral reefs.

"I looked at some recent satellite imagery and it looks like some of the oil may be shifted to the south," said Maul, a professor at Florida Institute of Technology in Melbourne, Fla. "If it gets entrained in the loop, it could spread throughout much of the Atlantic" [Discovery News].

If that happens, the oil could spread as far as Cape Hatteras in North Carolina, Discovery News

reports. Meanwhile, news about the efforts to stop the spill hasn't improved. Yesterday BP announced it had begun to drill a relief well

, one of the last available options to stop the leak created when the company's leased oil rig, the Deepwater Horizon, exploded and sank. The idea is that the new well would intercept the one Deepwater Horizon had tapped and plug it to stop the flow of oil, but it won't be completed for at least 60 to 90 days. Investigators also must figure out what went wrong with the blowout preventer (BOP)

, which should have prevented this entire incident. The device is intended to shut off the flow of oil if an out-of-control surge begins to ascend the pipe, but both its automatic and manual switches failed this time.

Deepwater Horizon is the second such accident in less than a year. Just eight months ago, the BOP failed on a deep-water well in the Timor Sea, north-west of Australia. After five attempts and 10 weeks a relief well was drilled and the flow – much smaller than Deepwater Horizon – was stemmed [New Scientist].

The Gulf oil spill has had political reverberations throughout the country, too. President Obama backed off a plan to allow more offshore drilling after the extent of the spill became clear, and now California Governor Arnold Schwarzenegger has done the same. Previously, Schwarzenegger proposed new drilling off the California coast to raise the money needed to save state parks from California's budget crisis. But after seen the pictures of oil spreading over miles and miles of ocean, the governor changed his mind.

"It will not happen here in California," Schwarzenegger said at a news conference. "If I have a choice between the $100 million and what I see in the Gulf of Mexico, I'd rather just figure out how to make up for that $100 million" [San Jose Mercury News].