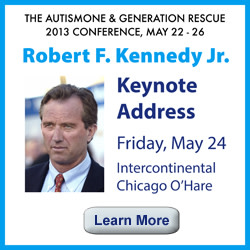 This is the annual confab of the anti-vaccine movement, where all the diehards gather to share their latest pseudoscience, quack therapies and conspiracy theories. Last year's keynote address was given by actress Jenny McCarthy. As Phil Plait writes:

McCarthy is the most famous face of the anti-vax movement. More than perhaps anyone else she has mainstreamed the incredibly dangerous claims of the anti-vaxxers, saying vaccines gave her son autism and that she cured him using what are known to be noneffective treatments.

If you want to learn what inhabitants of this alternate universe talk about amongst themselves, read this Skepchick post, which discusses McCarthy's talk and some of the panels at last year's conference. For a taste of what Robert F. Kennedy Jr. said in his keynote address at this year's event, let's go to a post at the Age of Autism website, written by its managing editor, who reports:

Each of us will have our highlights from last weekend's extraordinary Autism One gathering in Chicago, but for me it was Bobby Kennedy Jr. saying, "To my mind this is like the Nazi death camps."

What Kennedy meant by this I'm not sure, which is why I'm eager to see the video of his talk. Evidently, Holocaust analogies are part of the anti-vaccine discourse, for a little further down in the Age of Of Autism post we come to this:

The enablers may not belong in Nuremburg, but they do belong in jail, Bobby said. "I would do a lot to see Paul Offit and all these good people behind bars," he said, after listing Offit's litany of lies and profit. Just to make sure people got the point, he returned to it in his speech. "Is it hyperbole to say they should be in jail? They should be in jail and the key should be thrown away."

Paul Offit, for those not in the know, is, as his Wikipedia page describes him, "an Americanpediatrician specializing in infectious diseases and an expert on vaccines, immunology, and virology." He is an outspoken critic of the anti-vaccine movement and an author of numerous books challenging their claims. (Amy Wallace wrote a great profile on him for Wired in 2009.) Also from Wikipedia:

Michael Specter wrote that Offit "has become a figure of hatred to the many vaccine denialists and conspiracy theorists." Specter reported that Offit had often been threatened with violence by anti-vaccine advocates, necessitating precautions such as screening Offit's packages for mail bombs and providing guards when Offit attends federal health advisory committee meetings.

That Kennedy would fan the flames of this hatred in his recent speech to anti-vaxxers is irresponsible and despicable, as another science blogger has said. Of course, Kennedy's history of anti-vaccine advocacy is well documented. Here he is in full froth at a "greening our vaccines" rally in 2009:

Because of his celebrity status and standing in liberal and environmental circles, it is arguable that Kennedy has done as much as anyone to spread unwarranted fear and crazy conspiracy theories about vaccines. That said, his rantings have been roundly debunked and one infamous article he wrote in 2005 that contributed to the anti-vaccine hysteria has been retracted by the publishers. So does Kennedy's unhinged views on vaccines make him anti-science? Before you answer, let's have a look at what people say about Rep Dan Burton, who also appeared at this year's big anti-vaccine conference. As Roll Callnoted last year:

For more than a decade, Indiana Republican Dan Burton has been a leading House voice on autism and a proponent of the theory that mercury in vaccines contributes to the disorder.

Burton has often been called out for propagating this falsehood. That was again the case in December when Burton used a congressional hearing to, as Steven Salzberg wrote in Forbes,

rehash a series of some of the most thoroughly discredited anti-vaccine positions of the past decade. Burton is a firm believer in the myth that vaccines cause autism, and he arrogantly holds the position that he knows the truth better than the thousands of scientists who have spent much of the past decade doing real science that proves him wrong.

Burton has long been an advocate for quackery; for at least a decade he has used Congressional situations like this to promote antiscience.

Burton doesn't get enough credit for what may be his lasting legacy: helping turn Americans away from life-saving childhood vaccines.

Now let's go back to Robert Kennedy Jr. and his own anti-vaccine legacy, which he evidently is still working to solidify. The Age of Autism dispatch on his keynote speech reports:

Kennedy has put together a book-length treatment on the dangers of ethylmercury, given every year to 84 million children around the world including the United States (in prenatal and infant flu shots). He wants to get meetings with the CDC, AAP, FDA, etc., and get a commitment by the end of this summer to finally remove thimerosal from vaccines in one year. ONE year. If not, he said, he'll publish the book. "If they don't do this," he said, "this is what I'm going to do with my life." Since they're not going to do it, it looks like we've got a friend for life.

Yes, indeed. And Kennedy doesn't get enough credit for that, which may well be his lasting legacy.

HealthThe Deadly Polio Epidemic and Why It Matters for Coronavirus 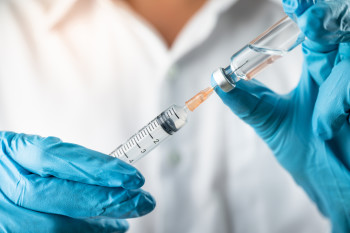 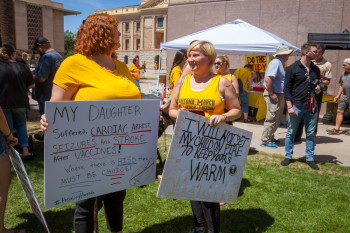