By Keith Kloor, a freelance journalist whose stories have appeared in a range of publications, from Science to Smithsonian. Since 2004, he’s been an adjunct professor of journalism at New York University. You can find him on Twitter here.

Greens are often mocked as self-righteous, hybrid-driving, politically correct foodies these days (see this episode of South Park and this scene from Portlandia.) But it wasn't that long ago---when Earth First and Earth Liberation were in the headlines---that greens were perceived as militant activists. They camped out in trees to stop clear-cutting and intercepted whaling ships and oil and gas rigs on the high seas. 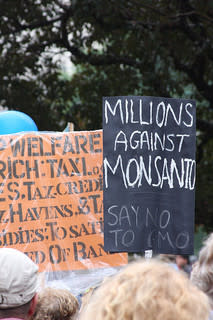 In recent years, a new forceful brand of green activism has come back into vogue. One action

(carried out with Monkey Wrenching

for the nascent climate movement. In 2011, climate activists engaged in a multi-day civil disobedience event

that has since turned a proposed oil pipeline into a rallying cause for American environmental groups. This, combined with grassroots opposition to gas fracking, has energized the sagging global green movement. But though activist greens have frequently claimed to stand behind science, their recent actions, especially in regard to genetically modified organisms, or GMOs, say otherwise. For instance, whether all the claims of fracking's environmental contamination are true remains

to be decided. (There are legitimate ecological and health issues---but also overstated ones. See this excellent Popular Mechanicsdeconstruction

of all the "bold claims made about hydraulic fracturing.") Meanwhile, an ancillary debate

over natural gas and climate change has broken out, further inflaming an already combustible issue. Whatever the outcome, it's likely that science will matter less than the politics, as often is the case in such debates. That’s certainly the case when it comes to GMOs, which have been increasingly targeted by green-minded activists in Europe. The big story on this front of late has been the planned act

of vandalism on the government-funded Rothamsted research station

in the UK. Scientists there are testing an insect-resistant strain of genetically modified wheat that is objectionable to an anti-GMO group called Take the Flour Back. The attack on the experimental wheat plot is slated for May 27. The group explains

that it intends to destroy the plot because “this open air trial poses a real, serious and imminent contamination threat to the local environment and the UK wheat industry.” http://youtu.be/JYEN_tvqQaw Last month, Rothamsted scientists, in an open letter

, asked to meet with the group to address its concerns. In the letter, they also pleaded with the activists not to carry out their avowed destructive act. Here is an excerpt:

We appeal to you as environmentalists. We agree that agriculture should seek to work "with nature rather than against it" (to quote from our website), and that motivation underlies our work. We have developed a variety of wheat which does not need to be sprayed with insecticides. Instead, we have intensified a way of getting the plant to repel aphids, using a natural process that has evolved in mint and many other plants--and simply adding this into the wheat genome to enable it to do the same thing. So our GM wheat could, for future generations, substantially reduce the use of agricultural chemicals. Are you really against this? Or are you simply against it because it is "GMO" and you therefore think it is unnatural in some way?

This outreach effort soon led to a televised debate

between the two sides and an online petition

in support of the scientists, organized by the Sense About Science

website. All the publicity has since generated much Twitter action, including a #dontdestroyresearch hashtag. But the attention may have also prompted an attempted break-in

to the Rothamsted research station by a GMO opponent several days ago. Perhaps this person wanted to get an early start on the "decontamination," though Take the Flour Back has denied any connection with the incident. 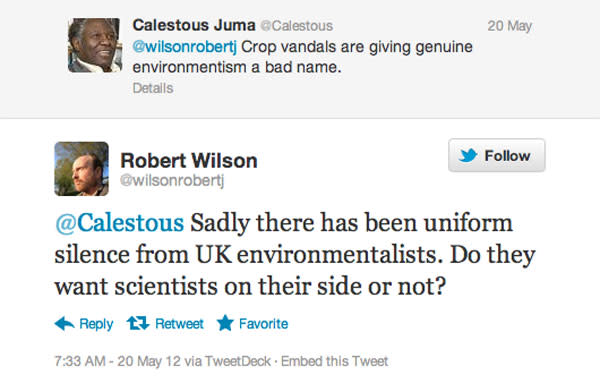 The plans to destroy a GMO wheatfield at Rothamsted sparked Twitter discussion.

The planned May 27 attack on the UK's government supported GMO research is not happening in a vacuum. As I recently wrote

" in recent years. But they call it “field liberation.” Oddly enough, just like people who dismiss climate change as some sort of global scam by scientists, many anti-GMO greens have constructed

a universe that suits their worldview. Many climate skeptics, for example, believe that the threat of global warming is cooked up by a UN-led cabal of scientists, whose real agenda is to impose one world fascistic or socialist government. A similar feverish perspective is held by many GMO opponents, who believe that genetic engineering is being shoved down the world’s throat by a few big corporate agricultural companies (Monsanto being the number one bogeyman). Greenpeace is especially active in developing countries

, such as India and China, setting itself up as the defender of small farmers and declaring that there “is enough scientific evidence now to show that GM crops are a risk to human health

.” The concerns raised by these activists have in fact been examined at length by scientists. In a recent post

at the Council on Foreign Relations, Isobel Coleman addressed a big one:

Fearing adverse health consequences, critics refer to GM crops as “Frankenfood,” but years of studies have not demonstrated any harmful effects. A 2010 report from the European Commission—a body not known to be friendly to GM agriculture—summarizes a decade of large-scale government-funded studies, concluding that “biotechnology, and in particular GMOs, are not per se more risky than e.g. conventional plant breeding technologies.” Of course, no studies have proven that GM agriculture is NOT harmful, which is the measure of proof that some opponents of GM require.

and Friends of the Earth

--embrace this criteria for GMOs. Consider, for example, the highly respected David Suzuki

, who, according to one survey

, is the most trusted man in Canada. He has said

Because we aren’t certain about the effects of GMOs, we must consider one of the guiding principles in science, the precautionary principle. Under this principle, if a policy or action could harm human health or the environment, we must not proceed until we know for sure what the impact will be. And it is up to those proposing the action or policy to prove that it is not harmful.

We also aren't 100 percent certain when global warming is going to arrive with a vengeance, much less do we know the particulars of numerous climate impacts. Should we wait for 100 percent certainty before proceeding with efforts to reduce greenhouse gases? Somehow, I'm guessing Suzuki would say no. As would many other scientists. But when it comes to GMOs, there's an impossible-to-meet standard. Why? I've been particularly interested

in this question lately. In doing some catch-up reading, I came across a fascinating roundtable

of views in a 2009 Seed magazine article, set up by this introduction:

Most Europeans don’t consider themselves to be anti-science or particularly technophobic. In fact, Europe’s full embrace of the scientific consensus on another environmental issue, global warming, has enabled the continent to take the clear lead on climate change, with the most ambitious emissions targets, the first carbon trading market, and the greenest urban infrastructure plans on the planet. Europe’s scientific disconnect is more broadly true of eco-minded citizens worldwide: They laud the likes of James Hansen and Rajendra Pachauri but shrink in horror at the scientist who offers up a Bt corn plant (even though numerous studies indicate that Bt crops—by dramatically curbing pesticide use—conserve biodiversity on farms and reduce chemical-related sickness among farmers). So why the disconnect? Why do many environmentalists trust science when it comes to climate change but not when it comes to genetic engineering?

to learn some of the proffered reasons, think about it first. And ask yourself this: Are environmentalists anti-science?