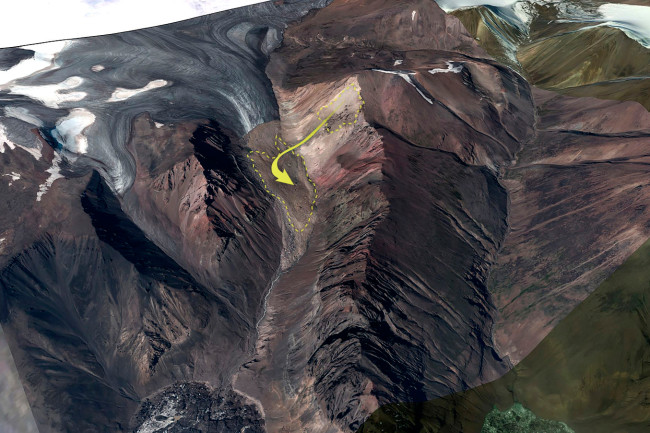 A satellite view shows a landslide in Alaska, with yellow indicating its direction. The debris field (outlined by the dotted yellow line) buried part of a glacier. | Colin Stark/Lamont-Doherty Earth Observatory/Pleiades Satellite

When a landslide tore through a remote Alaskan valley in July, no one was there to bear witness. But hours later, geoscientist Colin Stark of the Lamont-Doherty Earth Observatory spotted the event in the pattern of seismic waves passing through the Earth’s crust. Within days, using data from earthquake sensors and satellite images, he and colleague Göran Ekström were able to estimate, from their lab in New York, the landslide’s size, and even determine its path.

The forces generated by landslides aren’t as well understood as those that occur during earthquakes, partly because landslides often strike unpopulated areas with no observers. As a result, landslides leave few clues to how they unfold, making it difficult to predict them or prevent damage the next time.

When humans do live nearby, the consequences can be dire. In 2000, a landslide on the Chinese-Indian border went unnoticed. The rubble created a dam that broke a few months later, killing about 130 people. With better tools for understanding how landslides evolve, where they flow and why some parts of slopes crumble as they do, “these people would not have died,” Stark says.

Ekström and Stark’s collaboration began when Ekström was investigating an apparent series of earthquakes in Taiwan. The seismic data generated by the quakes seemed odd, so he approached Stark, an expert on landslides in the region. To understand the unfolding event better, they created an algorithm combining data from satellite imagery and the international network of seismic stations. The algorithm showed the event was not an earthquake at all, but a series of landslides.

Soon, Ekström and Stark expanded their work to investigate landslides elsewhere. To trace the footsteps of a landslide, they begin by using seismic waves to calculate its force. Then they overlay satellite images to see how far the rubble traveled. Using these parameters, they can calculate a landslide’s mass and acceleration — information otherwise impossible to glean, even for those videotaping the event.

Recently the two used their method to unearth crucial clues about 29 known landslides and discover previously unknown events, including a series of seven landslides in India in 2010. This kind of knowledge, they say, could eventually help researchers — and residents — steer clear of danger in advance of an event.

[This article originally appeared in print as "The Sound of Sliding."]