Invasive Species Could Kill Nearly Half of U.S. Forests 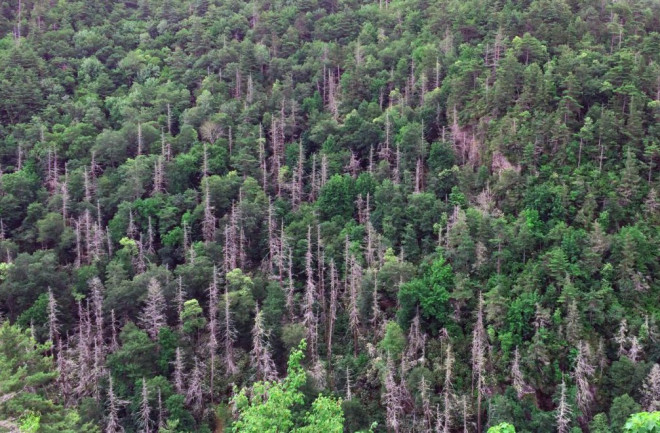 With its sparkling green wings, the emerald ash borer, a tiny beetle no longer than a knuckle-length, is almost beautiful. The insect however has been ravaging America’s forests for nearly 20 years. First seen in Michigan in the early 2000s, the invasive pest has killed millions of ash trees in more than 30 states.

The ash borer is not the only species devastating U.S. forests. More than 450 pests have invaded America’s woods. Now researchers find 15 of them threaten more than 40 percent of live forests in the contiguous U.S. Researchers say the discovery calls for better regulations to quarantine goods that the pests travel on.

“The important thing we have to realize is there has to be stronger policy in terms of regulation,” said Purdue University natural resources spatial analyst Songlin Fei, who led the new study.

A few years ago, Fei had to shell out a thousand dollars to cut down a dying ash tree in his backyard. On top of the economic costs, he began to wonder what the ecological costs of these pests were. He was particularly concerned about the impact forest losses might have on climate change. Forests take up and store carbon from the atmosphere. But when trees die and decay, they emit carbon dioxide.

Fei and collaborators at the U.S. Forest Service teamed up to quantify trees invasive pests had killed across America’s woodlands. The team first scrutinized data on non-native forest insects and pathogens from a Forest Service database. Then the researchers analyzed tree species and trunk diameter across nearly 93,000 plots of Forest Service land throughout the country.

The Carbon Not Captured

The researchers identified 15 pests that pose grave dangers to trees here. Then they calculated how much carbon storage capacity was lost as a result of trees dying from invasive species. About six million tons of carbon disappears from forests each year due to pests, Fei and colleagues report Monday in the Proceedings of the National Academy of Sciences.

The loss is equivalent to CO2 emissions from about 4.4 million cars driving the streets every year, the researchers estimate. And they say that number is likely an underestimation. In urban areas like Chicago, ash trees line the city streets, but the researchers only looked at tree mortality in forests.

But Fei says not all hope is lost. Many of the pest species have only invaded less than a third of their potential range. Although nearly half of forests are at risk of invasion, it also means there’s time to take action. Better policies that curb the spread of pests will help, but everyone can do their part, he says. If you’re camping this summer, don’t move your firewood. “If you move