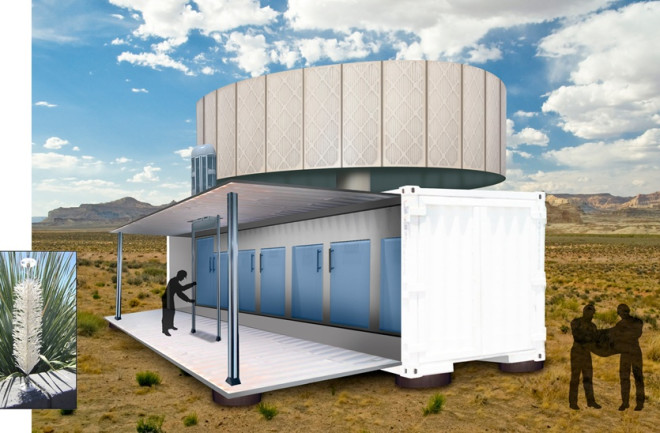 Plastic tree-like filters, like the prototype on the left, could someday be housed in structures like this one. Klaus lackner; Global Research technologies

The amount of carbon dioxide (CO2) in the air is now at its highest level in human history, largely because of coal-burning power plants and vehicle emissions. Only about half of the more than 30 billion metric tons of CO2 emitted worldwide each year gets reabsorbed naturally by the planet’s oceans and forests.

But what if we had a system of artificial “trees” a thousand times more efficient than real ones that could suck CO2 out of the air and keep it out? Columbia University physicist Klaus Lackner is working on a filter that can do just that.

Lackner envisions artificial trees small enough to fit in a shipping container but large enough to capture a ton of CO2a day.

A sea grass bed off the coast of Mexico could serve as a carbon sink. Estrella Malca/University of Miami/NOAA/Department of Commerce

Coastal habitats, including mangrove forests and sea grass beds, cover only a small fraction of the world’s surface, but these fringe ecosystems harbor an enormous amount of carbon. Organic matter — the decaying remains of once-living plants and animals — becomes trapped by the roots of aquatic plants. Over time, this carbon-rich detritus builds up, sometimes to depths as great as 10 feet, representing hundreds of years of accumulation.

By some estimates these habitats and their so-called blue carbon stocks — in the soil and the plants themselves — store up to five times more carbon than tropical rainforests the same size.

Just as preserving forests offers a chance to sequester carbon and curb climate change, preventing the disruption of coastal habitats, which are often razed for development or aquaculture, ensures that their deep carbon deposits are not released into the atmosphere as carbon dioxide.

Blue carbon markets, in which countries or corporations could offset CO2 emissions by buying carbon credits from projects that create or protect carbon-rich habitat, could become viable in two to three years, says John Bruno, a marine ecologist at the University of North Carolina in Chapel Hill. “It’s something really tangible that has a triple bottom line: It’s good for the environment, good for people, and it’s profitable,” says Bruno, who studies carbon sequestration rates of mangroves in Muisne, Ecuador.

See how the densely forested country of Guyana is balancing logging biodiversity and carbon sequestration in this month's Notes from Earth column: How to See the Forest and the Trees. Pete Oxford/Minden Pictures
1 free article left
Want More? Get unlimited access for as low as $1.99/month
Subscribe