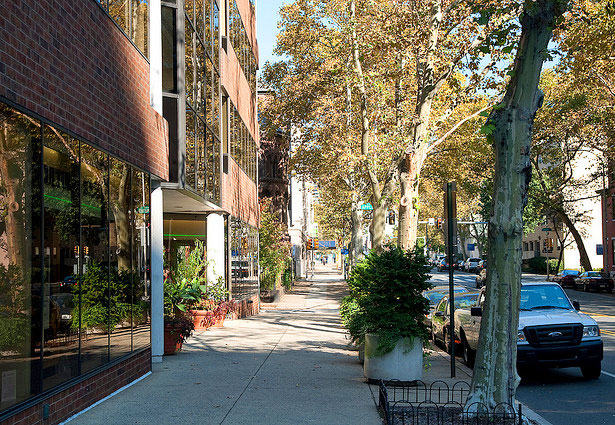 Say you live down the street from a small urban park---does that make you feel more safe, or less? Green space has been thought to work both ways. Shrubs, for instance, could conceal burglars, or a tree-lined sidewalk could obstruct a clear view of the street. On the other hand, green space encourages people to spend more time in public areas, which deters crime---and greenness might even be good for the soul. A new study finds that, in Philadelphia at least, greener neighborhoods have significantly fewer crimes than non-vegetated areas. And this effect held true even after the researchers controlled for socioeconomic factors. The researchers began with crime data for 2005 across the city, broken down by neighborhood (each containing a few thousand people) and type of crime: assault, robbery, burglary or theft. (The authors chose not to include rape and murder because they are relatively rare.) They combined this data with images taken the same year by NASA's Landsat satellite. The satellite carries a sensor which can detect chlorophyll remotely, from which the researchers calculated an average "greenness" of each neighborhood. When the data were matched up, the researchers found that greenness was a strong marker of safety. Rates of assault, robbery and burglary were all significantly higher in non-vegetated neighborhoods. This effect remained true even when the effects of population density, poverty and education were taken into account, the authors report in Landscape and Urban Planning. The explanation, the authors say, is twofold: One, green spaces encourage people to spend more time socially outdoors, which discourages crime. It's especially helpful for crime control when young and old people mix together in public places. And two, the presence of plants has a therapeutic effect. Vegetation decreases mental fatigue and its associated symptoms, such as irritability and decreased impulse control, both considered to be precursors to violence. This "plant therapy" mechanism is bolstered by the Philadelphia findings. The most violent of the crimes studied, aggravated assault, was most strongly correlated with a neighborhood's degree of greenness, while the least violent crime, theft, showed no association. This could indicate that it's a violent mentality itself that green spaces are discouraging. That hypothesis needs further study. This project didn't differentiate between well-kept green areas and overgrown vacant lots, for example, which would likely have different effects on crime. And it only looked at one year in one American city. However it's something for city planners to consider---and perhaps, in their zeal to make cities safe, to plant a tree. Image courtesy Mihai Bojin / Flickr