In satellite imagery, the dangerous nor'easter battering the U.S. East Coast is a beastly beauty of a storm 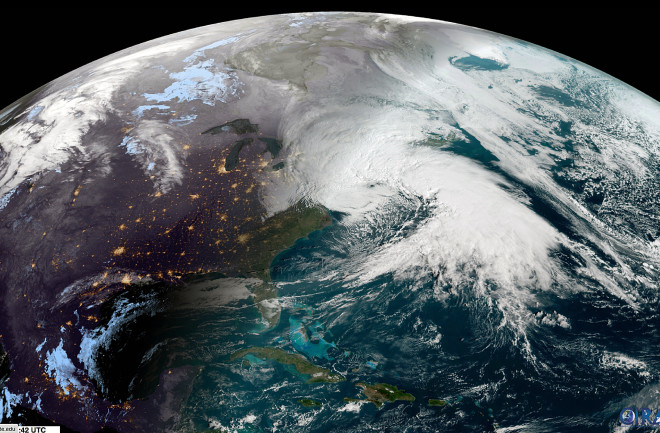 Satellite image of the nor'easter swirling along the U.S. East Coast today. (Source: RAMMB/CIRA) A nor'easter with winds ranging up to hurricane strength is causing misery along much of the U.S. East Coast today. But from space, it's a strangely beautiful sight to behold. The fierce storm is causing flooding, power outages, suspension of Amtrak rail service, and hundreds of delayed or cancelled flights in and out of area airports. New York's LaGuardia airport has closed down completely due to high winds. The storm may even turn out to be more damaging than the "Bomb Cyclone" that struck the region in early January. The view of the storm at the top of this post was acquired by the GOES-16 weather satellite just after sun up on the East Coast. The image captures something of a decisive moment — the storm swirling along the coast during the transition from nighttime to daytime.  This is what's known as a "GeoColor" image — a hybrid view based on light from both the visible and infrared portions of the electromagnetic spectrum. This allows the image to clearly depict sun-lit areas as well as regions still shrouded by the darkness of night. In the sun-lit portion, the colors look about as they would from space to human eyes. In the nighttime areas, the blue colors are indicative of liquid water clouds, while gray to white indicate higher ice clouds. In GeoColor imagery, city lights are added using a static database derived from other satellite imagery. Here's an animated view of the storm from GOES-16: https://twitter.com/NASA/status/969628945309159425 It may be beautiful when seen from space, but on the ground it is anything but, as these videos posted to Twitter today show: https://twitter.com/quincymapolice/status/969600630082940929 https://twitter.com/quincymapolice/status/969608680814628864 Make sure to stick with this one until you see the car pushing its way through floodwaters: https://twitter.com/dac303/status/969610493278244865