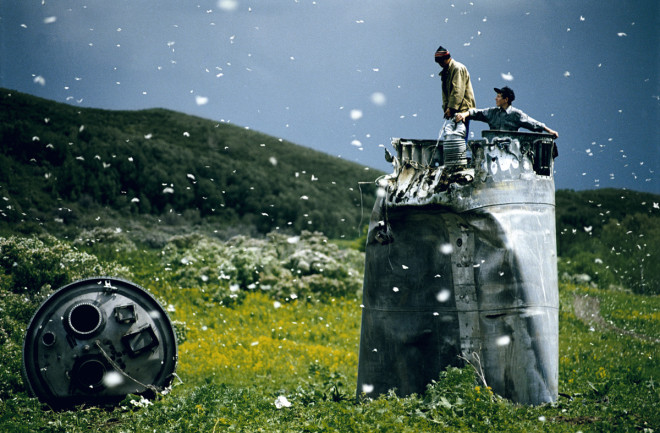 Villagers collecting scrap from a crashed spacecraft, surrounded by thousands of white butterflies. Environmentalists fear for the region's future due to the toxic rocket fuel. (Credit: Jonas Bendiksen/Magnum)

The Altai mountain region of Central Asia is a rugged and remote place. Right in the center of the continental landmass, it forms a crossroads between the Kazakh steppes, the snow forests of Siberia and the arid plains of Mongolia. It’s a landscape of granite, forced up by the inch-a-year collision of the Indian tectonic plate with Asia, then carved out over millions of years by streams of snowmelt. Siberian Ibex wander here, along with musk deer feeding on the lichenous rocks and brown bears that follow the retreating snow fields in spring.

This might be one of the most remote places on earth, little accessible by road, but its peace is routinely broken in the most dramatic way. That’s because the Altai region sits right beneath the main flight path of the oldest, largest and busiest spaceport in the world: the Baikonur Cosmodrome. Debris from each rocket launch rains down on these remote hills, and the people of the region are forced to make a living among the falling scraps.

Built in 1955 in the grasslands of southern Kazakhstan, the Baikonur Cosmodrome has been the launch site for many historic missions. Earth’s first artificial satellite Sputnik 1 launched here, and Yuri Gagarin’s 1961 flight as the first human into space also took off from Baikonur. Today it’s home to space missions from around the world, including monthly commercial, scientific and military launches. Since the retirement of the US shuttle program, Russian Soyuz capsules launched from Baikonur have also become the only remaining lifeline to resupply and re-man the International Space Station (ISS). Between 2006 and 2018, NASA paid the Russian space agency Roscosmos approximately $3.4 billion USD to ferry astronauts to the station.

All this traffic creates a huge amount of debris along the corridor of rocket flightpaths. To lift a 6.3 ton satellite into geostationary orbit requires a 4-stage Russian Proton rocket weighing nearly 700 tons. As the rocket streaks off in its northeasterly flight path, booster rockets peel away from the craft in 3 stages and fall back down to Earth. While rockets launched from NASA’s Kennedy Space Center in Florida are able to drop their boosters relatively harmlessly into the Atlantic ocean, Baikonur is about as as far from the ocean as it is possible to get. That means the discarded stages of Russian rockets tumble back down on dry land. The first stage usually falls within 90 kilometers of the launchpad, but the second stage flies for a full 14 minutes more, and lands with potentially devastating impact 1,000 km away in the Altai.

Russian media estimates that over 2,500 tons of space debris have rained down on the region since launches began in the 1950s, some segments as large as 10 meters in length. During the Soviet era, the USSR took great pains to recover Baikonur booster rockets, partially due to concerns about leaking secrets related to the space program. However, since the collapse of the Soviet Union, these pieces of space debris have increasingly been left to rust in the grasslands of Kazakhstan and the Altai mountains.

A band of scrap metal dealers scan the sky while waiting for a rocket to crash. (Credit: Jonas Bendiksen/Magnum)

The launches have become a familiar sight for those who live beneath the flight paths. Pieces of falling debris look “like an angry red eye in the night”, one resident says. Then there is a great thundering sound, and “a small earthquake” shakes the ground. Roscosmos designates a narrow strip of land across the region in which the rocket stages are supposed to fall. Residents within this zone are given 24 hours’ notice of a launch to get themselves to safety, and it’s only outside this zone that people can claim compensation for damages. However, incidents outside the zone are far from uncommon. In 2008, a piece of debris measuring 4.5m in length even landed in a village, narrowly missing a house. Debris rains down even when launches go to plan; failures can have much more serious consequences. In 2011 an unmanned Progress 44 capsule atop a Soyuz-U rocket was headed to the ISS when it failed in the first 5 minutes of its  launch. The rocket tumbled back down to Earth with its later stages still full of fuel, and hit the mountains of the Altai. The resulting explosion shattered windows up to 100 km away, though no one was hurt.

While many residents fear the monthly rocket launches that pepper the region with debris, others see in it a unique opportunity. Resourceful scrap dealers wait for the announcement of rocket launches and then watch the sky with binoculars. They track the paths of debris and ride out on jeeps and even on horses to the crash sites. With little protective gear other than welding masks, they use blowtorches to strip the wrecks of their valuable light metals, alloys of titanium and aluminium, as well as other useful components like copper wire. Visitors to the region have reported seeing the roofs of chicken coops and sheds built with rocket parts still showing the original Proton insignia. Even farm tools and sledges for children have been built out of the fragments of rocket hulls.

It’s dangerous work for the scrap dealers. Rocket parts are frequently still burning when they arrive, leaching noxious vapours and setting off wildfires in the dry steppes. Nevertheless, the precarious economic reality of the region means that the extra source of income is indispensable. Here, a whole industry has sprung up around the waste of the world’s richest nations as it rains periodically from the sky.

Residents’ tendency to bring parts of the rockets back to their villages poses serious dangers, though. Rocket fuel, especially of the kind used by Russian and Chinese rockets, contains highly toxic components, and discarded rocket sections can have as much as 10% of their fuel remaining when they tumble back down to Earth. Of these, the most feared is heptyl, which is extremely toxic, and has been linked to cancers and birth defects. In 2008, a farmer in the Altai region filed for compensationwhen four of his horses died after toxic substances from rocket debris allegedly leached into the soil of their grazing lands.

The people of the Altai depend heavily on the land, growing crops, raising livestock and foraging for pine nuts in the virgin snow forests of Siberian cedar. Doctors in the region blame increasing health problems on the proliferation of space junk falling down to earth and the toxic compounds that make their way into the food and water. In 2005, a Nature study showed children in affected areas were twice as likely to develop endocrine and blood disorders, with rates of all other diseases markedly higher too. In some villages, virtually every child is reportedly born with jaundice. One farmer has even recounted seeing Siberian deer wandering the snow forests, blinded by toxic chemicals. The Russian government denies any evidence of a connection between the rocket debris and ongoing health problems, but they have elected to keep their research out of the public eye.

Despite its long history, Baikonur’s heyday might soon come to an end. Currently under construction is the Vostochny Cosmodrome, a new facility in the far east of Russia intended to reduce dependency on the landlocked Baikonur. At a cost of $7.5 billion USD, it might help to reduce the environmental impact of rocket launches on the people of the Altai. However, reports of corruption and the exploitation of workers has dogged the expensive project, and it will not begin to launch heavier rockets until 2021.

A farmer taking an evening stroll past the wreck of a Soyuz spacecraft. In this agricultural village, rockets routinely fall into people's back yards. (Credit: Jonas Bendiksen/Magnum)

A farmer taking an evening stroll past the wreck of a Soyuz spacecraft. In this agricultural village, rockets routinely fall into people’s back yards. (Credit: Jonas Bendiksen/Magnum)

Today, the pockmarked and poisoned grasslands of the Altai seem like a striking metaphor for the world’s inequality and the costs of technological progress. While the richest nations send their citizens and machines to explore the further reaches of the solar system, their debris rains down on some of the world’s poorest. The region asks us to contemplate what moral price our progress comes at, and who in the end gets to decide this cost.