Guyana's tropical rainforests protected under the REDD program provide not just natural resources but an income stream to the country. 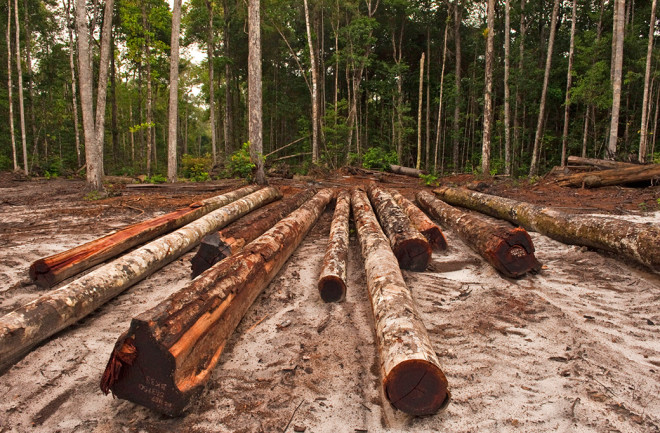 Two hours south of Georgetown, Guyana, a paved highway recedes, giving way to a rutted red road gushing through thick rainforest. In its muddiest spots, the road swallows trucks and spits them out at dangerous angles. Many hours later, it leads to an area of protected land called Iwokrama, a Rhode Island-size forest in the heart of Guyana, crowded with ancient buttress-trunked trees draped in liana vines.

Since 2003, Jake Bicknell has been a fixture within this forest. Now a doctoral student in biodiversity management at the U.K.’s University of Kent, he is cataloging Iwokrama’s iconic and bizarre species, including jaguars, giant anteaters, anacondas, and scads of birds and bats. (Guyana boasts more than 700 bird and 120 bat species.)

Specifically, he’s in Iwokrama to find out how logging affects tropical forest wildlife. Conventional logging ruins forests and decimates species, but low-impact methods of harvesting timber might not be so damaging. In fact, Bicknell believes selective logging can become a tool for protecting the forests and biodiversity of Guyana — a developing country eager to tap its natural resources as a way to boost its economy.

“There will always be a market for products extracted from forests, so the point is to do it in the least impacting way,” says Bicknell.

Iwokrama provides the perfect setting for Bicknell’s work. The reserve was established as a rainforest research center in 1996, with half of its land remaining untouched while the other half is set aside for sustainable logging, ecotourism and the production of crabwood oil from carapa seed by forest-dwelling communities.

At Iwokrama, which means “place of refuge” in the Amerindian language of Makushi, forest managers harvest timber using a technique called reduced-impact logging. They must generate maps identifying every tree they intend to cut, targeting ones at least 13.8 inches in diameter at chest height and more than 24 feet apart. And they identify the best direction to fell trees, carefully planning the paths used to drag timber out of the forest. Done properly, such practices kill fewer trees and leave only small gaps in the canopy, bringing in just enough light to encourage the growth of seedlings, so that foresters don’t need to replant.

In contrast to sustainable forestry, conventional logging tends to open up big holes in the canopy, letting light pour into the normally dark and humid forest, drying it out. Plants die. Animals die or move on. And conventional logging roads can wash fuel and sediment into nearby waterways and introduce farming, mining and illegal hunting.

Bicknell was familiar with research on the benefits of reduced-impact logging for forest preservation, but few studies had examined how sustainable forestry practices affected wildlife in the rainforest. Iwokrama offered an ideal opportunity to survey mammals, birds and bats in both unlogged and selectively logged areas, to see if reduced-impact logging put a dent in biodiversity.

He began in 2008 with standard wildlife surveys, observing species at six sites — three logged and three unlogged, including two in a forest adjacent to Iwokrama. For weeks, Bicknell and the Amerindian observers he hired trudged along, at about a mile per hour, scanning the forest for spider monkeys, red-rumped agoutis and more.

The first set of data looked promising. Reduced-impact logging had little effect on most of the wildlife, but Bicknell did find that two large fruit-eating and canopy-dwelling monkeys were less abundant at logged sites. He suspected he had surveyed the sites too soon after they were cut and decided to expand his next study, in both time and scale.

Later that year, he identified 20 sites in central Guyana: 17 scheduled for reduced-impact logging and three control sites that would remain untouched during the study period — from 2008 to 2013. He also expanded the census to include bats and smaller birds. Nearly every day, starting at dawn, he walked through the forest, opening a series of finely woven nets.

At the end of the day, after he and his team patrolled for signs of wildlife, they went back to the nets, untangling and recording the sex of screaming pihas, cinnamon-crested spadebills and other bird species. The routine was repeated at night, when they opened bat nets and wandered through the utterly dark forest, taking stock of its nocturnal creatures. He surveyed sites before and after logging.

And it was during this phase of field research that something unexpected happened: Guyana decided to sell most of its forests ­— not for logging, but on the global carbon market.

Trees are thirsty for the potent greenhouse gas carbon dioxide, soaking it up during photosynthesis and storing it in their roots, branches and leaves. Each year, forests around the world absorb nearly 40 percent of all the carbon dioxide produced globally from fossil-fuel emissions. But deforestation increases the amount of carbon dioxide in the atmosphere as trees are burned or start to decompose.

In nearby Brazil, huge swaths of the Amazon rainforest have been cleared to make way for cattle, farmland and commercial logging. While Guyana has one of the lowest deforestation rates in the developing world, it is also one of the poorest countries in the Western Hemisphere and under pressure to carve into its forests to bring in money.

In November 2009, eager to strike a balance between growth and conservation, Guyana made a deal with Norway, which agreed to pay up to $250 million over the course of five years if Guyana maintained its low deforestation rate. It was the first time a developed country conscious of its own carbon-dioxide emissions had paid a developing country to keep its trees in the ground.

Under the initiative, developed by the United Nations and called REDD+ (for Reducing Emissions from Deforestation and Forest Degradation plus conservation), Guyana can continue logging as long as biodiversity is protected.

To date, Norway has paid Guyana $115 million. “Ten, 20 years down the road, I hope that we still have the forest standing and are getting payments for carbon storage,” says Bryan Allicock, a Makushi who works for the Ministry of Amerindian Affairs. “We live off the forest and we live for it.”

The deal also gave Bicknell more hope for Guyana’s forests: “This country is going to develop, but what’s gone wrong in Brazil could go right in Guyana.”

Now back in the U.K., Bicknell is analyzing his data. He’s determined that some birds may be affected by low-impact logging operations, but bats aren’t. Conservation International, a nonprofit that advises developing countries on carbon sequestration projects and has a strong presence in Guyana, has started to collaborate with Bicknell.

In addition to his wildlife observations, Bicknell has added 10,000 records covering 20 years of wildlife census data from other researchers into an algorithm that highlights biodiversity hot spots. With some tweaking, the map should help Conservation International and the Guyanese government pinpoint more areas to protect, such as those with rare species like the giant anteater, and others where some activity, such as low-impact logging, could continue under REDD+.

It’s an approach that is starting to catch on elsewhere. About a dozen other countries with low deforestation rates are plotting their development strategies. Conservation, says Bicknell, doesn’t have to be at odds with development. “There are threats to biodiversity and opportunities. Let’s try to marry development with opportunity.”

[This article originally appeared in print as "Seeing the Forest and the Trees."]

To find out about other projects that combine development and conservation, check out these <a href="~/link.aspx?_id=4855C0820DBC462B8363D29CE1412A39&_z=z">innovative methods for capture carbon</a>. | Klaus Lackner
1 free article left
Want More? Get unlimited access for as low as $1.99/month
Subscribe