In 300 Million Years, Never Has the Ocean Acidified So Fast 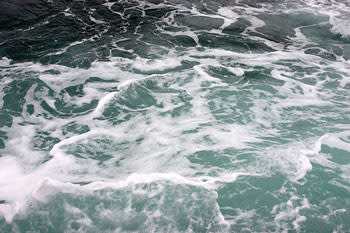 In addition to rising temperatures, wildly fluctuating weather, and higher sea levels, global climate change is triggering a spike in the acidity of the oceans

, as the carbon dioxide in the atmosphere reacts with seawater. In an attempt to see whether anything like the projected climb in acidity has happened before and what we can expect the results to be, scientists have been looking into the geological record and recently published their findings in Science

. Poring over the carbon isotopes in ancient rock, the fossilized bodies of long-extinct creatures, and the chemical compositions of those bodies, they looked as far back---300 million years---as we have fairly reliable geological records. They found that for the track we're on, there really is no good analog in the past: even the extreme extinction events of the Permian-Triassic Mass Extinction

, which killed 96% of marine species, and the Paleocene-Eocene Thermal Maximum

, which likewise caused huge extinctions in the oceans, happened after slower rises in acidity than we will see. It's hard to say how much of those massive extinctions was due to acidification and how much was due to related factors, like warming. But we already know that we're looking at some pretty serious effects in the future, and this confirms that we're heading into uncharted territory .