For the planet overall, 2021 finished as sixth warmest year on record. 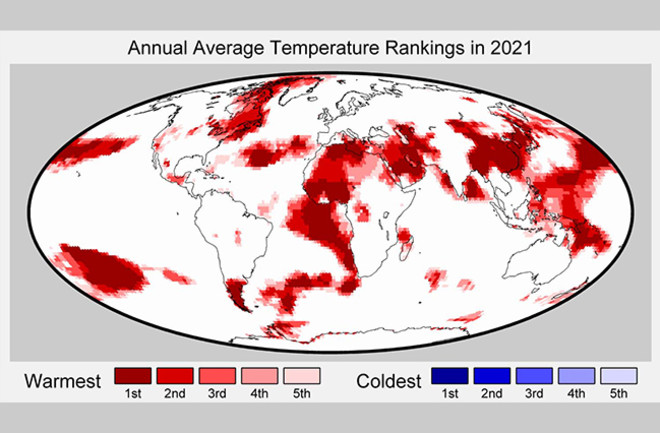 During 2021, locations that are home to about 1.8 billion people saw record high annual average temperatures. The largest contributor was record warmth over much of China. (Credit: Berkeley Earth)

The year finished with an annual global temperature that was 0.84°C (1.51°F) above the 20th century average, according to an announcement today by the National Oceanic and Atmospheric Administration. This makes it the sixth warmest year in records dating back to 1880.

In its own independent analysis, NASA found that the globe tied with 2018 for sixth warmest year on record.

The Heat Goes On

The La Niña climate phenomenon helped tamp down global temperatures just a bit this past year. Even so, the years 2013 through 2021 all rank among the ten warmest on record, according to NOAA. And you have to go all the way back to 1977, 45 years ago, to find a year with global temperatures that were, at least nominally, cooler than the 20th century average.

For about 1.8 billion people on the planet, 2021 turned out to be record warm, according to a third independent analysis, conducted by scientists at Berkely Earth, an independent, U.S. non-profit organization focused on environmental data science.

New record high annual averages were set in 25 countries overall, including China, South Korea, and Nigeria, according to Berkeley Earth's analysis. “We estimate that 8.3 percent of the Earth’s surface set a new local record for the warmest annual average,” said Berkeley Earth Lead Scientist Dr. Robert Rohde, in a statement. “In 2021, no place on Earth experienced a record cold annual average.”