Image of the Day: CRAAAACK! SPLIT! A Giant Iceberg Calves from Antarctica (Again...) 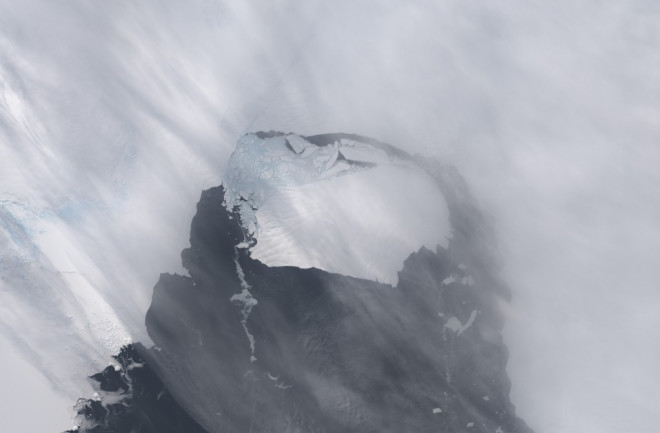 A major iceberg cracked off the Pine Island Glacier in Antarctica between Nov. 9 and 11, 2013. (Source: NASA Earth Observatory) It has been anticipated since October, and now a large iceberg has finally split away from the Pine Island Glacier in Antarctica. This is one big chunk of floating ice — 21 by 12 miles, or 252 square miles. (That's a bit smaller than the city state of Singapore.) The Landsat 8 image above, from NASA's Earth Observatory, shows it beginning to drift away on Nov. 13. (For more EO images of the event, go here.) This is by no means the first such large iceberg to calve from the glacier. A similar sized chunk cracked off and floated away just this past July. The fastest moving ice stream in Antarctica, the Pine Island Glacier flows out of the West Antarctic Ice Sheet. It is thinning rapidly as it discharges more ice into the ocean than any other glacier on the continent. And that rate of discharge has been increasing, possibly related to a warming climate. In a region that is frozen most of the time, how could warming be having this effect? The answer: water. Relatively warm water, to be exact, circulating under the ice shelf at the end of the Pine Island Glacier. http://www.youtube.com/watch?v=qzVM-aR-e60 This NASA visualization shows how it works, and also discusses research in which scientists have drilled all the way through the ice shelf to install sensors that monitor temperature, salinity and other factors. (For a detailed explanation, go here.) The ice shelf at the end of the glacier buttresses the river of ice, slowing its flow into the ocean. But westerly winds have been blowing frigid surface water away from the ice shelf, allowing warmer water from the intermediate layers of the Southern Ocean to well up. This warmer water has been eating away at the underside of the ice shelf. (The orange and yellow moving arrows in the animation above.) And this, in turn, has been weakening the buttressing effect, allowing the glacier to flow faster. In an interview with Environment 360, Robert Bindschadler, an emeritus NASA glaciologist who led the team that drilled into the ice shelf, summed it up this way:

We’re firmly of the opinion that heat is getting to the ice and causing these major changes. So even if you isolate Antarctica somewhat on the surface from global warming, there’s this back door where heat is still getting to this part of the ice sheet.

Currently, the Pine Island Glacier dumps some 46 billion tons of ice into the ocean every year, and the rate has been increasing by 5 to 10 percent each year.