Image of the Day: Computer Model Portrait of the Wind 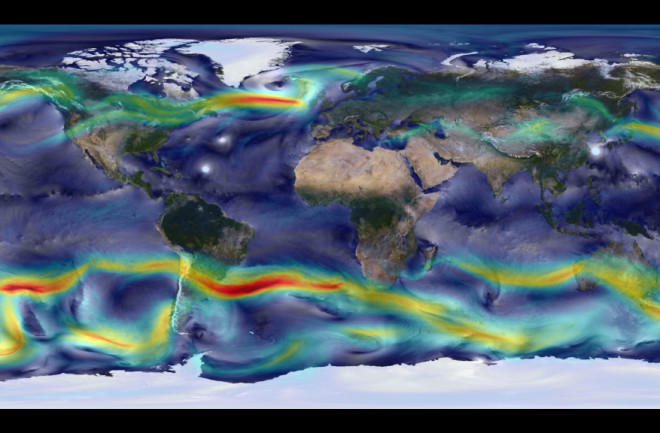 A NASA computer model produced this high resolution simulation of global winds. (Source: William Putman/NASA Goddard Space Flight Center) This beautiful visualization simulates global wind patterns, including jet streams in the Northern and Southern hemispheres, as well as individual tropical cyclones. It was produced by a system of integrated models, called GEOS-5, run on a NASA supercomputer. Click on the image to get a bigger view and look in particular for small white circles in the Atlantic and Pacific oceans. If you look closely, you'll see faint spiral arms. And a dark center is clearly visible in the center of the one located off the coast of China. These are surface winds from cyclones simulated by the model. The other features are upper level winds, with red coloring indicative of the highest speeds. They look like atmospheric rivers — and in a sense, they are: These are jet streams. (For an even higher resolution version of the image, which allows you to zoom in very close to individual features, click here.) http://www.youtube.com/watch?v=FNnIrIuNbeA This second simulation, also produced by the GEOS-5 supercomputer model, visualizes jet stream patterns in the Northern Hemisphere. As it progresses, you'll notice that the jet stream develops big kinks over North America. Some research has shown that warming in the Arctic is contributing to these big jet stream kinks, which in turn tends to cause weather events such as heat waves and extreme rainfall events to stall and therefore linger longer than they otherwise would. (Andrew Freedman explains the research in this story at Climate Central.) By modeling atmospheric wind flows, scientists hope to gain better insights into how climatic factors affect weather. NASA is using GEOS-5 to do much more than simulate global wind patterns. Run on the Discover supercomputer at the NASA Center for Climate Simulation, the modeling system has been simulating weather down to a geographic resolution of just 3.5 kilometers across. Here's how NASA describes the project:

http://www.youtube.com/watch?v=mlvLX7YvI88 Here's another product of this modeling effort: a collection of visualizations, from the NASA/Goddard Space Flight Center Scientific Visualization Studio, showing clouds moving over Africa, Europe, Australia, North America, Florida, South America and Antarctica. Keep in mind when you watch the simulations that they show no passage of day and night. If that diurnal effect had not been removed, sunrises and sunsets would sweep across the scene repeatedly and distract from visualizing cloud movements. Even so, you can see one diurnal pattern: Big puffy clouds blossoming and subsiding over Africa in a cyclical pattern. Each day, the clouds grow as heating from the sun causes water vapor to rise in the atmosphere. Here's how the process works: As water vapor rises higher and higher it cools, and when the temperature gets below the dew point, tiny water droplets condense, forming clouds. With nightfall, the solar energy that was causing water vapor to rise goes away. So the cloudiness subsides.