Antarctica is a desolate, far-away place, but what happens there could reshape life along the coasts 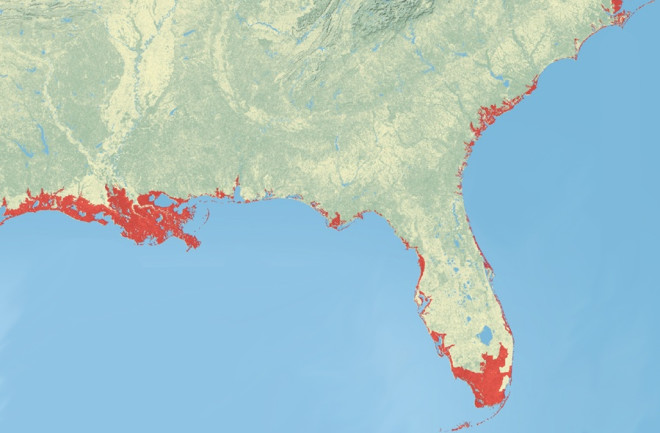 If the West Antarctic Ice Sheet collapsed, it would cause some 10 feet of sea level rise, and nearly every mile of the southeast U.S. coastline would be inundated. Large regions of Florida and Louisiana would flood. CRESIS/University of Kansas/Haskell Indian Nations University/National Science Foundation

As the atmosphere warms, heat is transferred to the oceans, which causes water expansion and rising sea levels. Today, Earth’s oceans are warmer than they have been in 100,000 years, according to research published in Science in January.

Scientists discovered this by using sediment cores from around the world to reconstruct sea surface temperatures from the last interglacial period, which started roughly 129,000 years ago. At that time, temperatures were similar to those from before the Industrial Revolution. The study also showed that 4,000 years later — so, 125,000 years ago — sea surface temperatures had warmed up to nearly match today’s readings. That means that, during the interglacial period, it took the planet millennia for a temperature increase that humans managed in just centuries. Alarmingly, sea levels back then were at least 20 feet higher than today’s.

The study is just one of a growing number that look at how the Antarctic Ice Sheet behaved in the past and suggest sea level rise could be higher — and come sooner — than scientists expected even a few years ago. Dozens of feet of sea level rise could take millennia, but the latest estimates suggest as much as 8 feet by the end of the century on the extreme end of projections. That timeline is still one of the biggest unknowns.

Meltdown Scientists see warnings of the chaos to come at Earth's poles. Discover's Eric Betz joined NASA aviators and researchers as they flew over Antarctica assessing the meltdown. Read his full account from the front lines of climate change.

If Earth is now locked into many feet of ocean rise, it would be enough to flood major metro areas. And the risk to some low-lying areas will rise in mere decades, not centuries. For example, New York City is expected to see regional sea levels rise as much as 30 percent more than the global average. Mud cores pulled from marshes in the city show that the sea level is already rising faster there than at any time in the past 1,500 years, according to research published in the Holocene Journal in January. Using their sample site in the Bronx, the scientists found local ocean levels have risen by more than a foot since 1850.

In New York City, studies estimate that adding several more feet of sea level rise would cause some $26 billion in damage and displace nearly 100,000 people by the end of the century.

Rising oceans could soak many areas of New York City. Mud cores show that sea level rise is happening in the region faster than at any other time over the past 1,500 years. Climate Central.org/Google Earth

To visualize what rising seas would look like in real life, artist Nikolay Lamm enlisted help from Climate Central scientist Remik Ziemlinski to manipulate images of major cities using the latest science. In the example below, Lamm combined sea level data and topographical flood maps to estimate how high medium tide waters would rise in Boston’s Back Bay area. The white cones on the maps indicate the exact location and direction the viewer would be facing. Lamm says his goal was to show people that the places they cherish today might not be there for future generations.