If the Catastrophic Weather Events Don't Get Us, the Irrationality Might 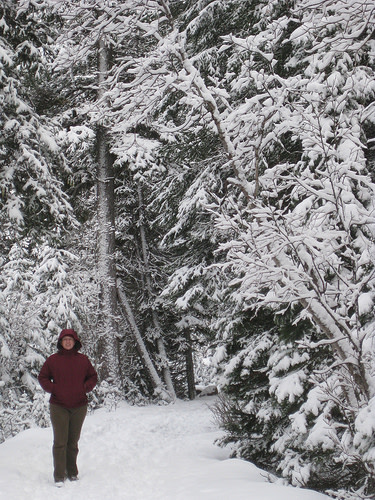 What the weather's like affects some people's beliefs about global climate change, a new study found

: On hot days, they're all over it, but on cold days, they're not so sure. This is not impressive, people. It's called "global," meaning not just what you personally felt when you walked out the door this morning. "Climate" also means something different from "weather"

, and "change" could mean things will get warmer, colder, or just plain different. On unusually chilly days, these climatically labile folks are 0 for 3. If only that was the worst of it. A string of studies have shown that people are comically bad at consistently thinking, well, anything when it comes to climate change. Even miniscule differences in what we're up to at the moment or how we're asked can have a big effect on what people think of climate change and what they're willing to do to help. Here are five more ridiculously simple things that get people to change their minds: What's on TV. I'm sure you all remember the 2004 hit film The Day After Tomorrow

, in which global warming throws Earth into a new ice age, all of a sudden, much to everyone's surprise. After the movie came out, one study showed

, people believed in global warming more, worried about it more, and felt it was more dangerous than they had a few weeks earlier. Where data fail, have Jake Gyllenhaal run through the streets of an ice-bound New York. Wording of what's happening. About 10% more people think weird things will happen to Earth's climate when you call those weird things "climate change" than "global warming," a study in March found

---because the exact phrasing is what's really important here, not the weird-climatic-things part. Wording of what we should do. It's no secret that feelings on climate change are split along party lines

, or that Republicans don't much care for taxes

. If you ask Republicans to shell out extra cash for a plane ticket because of a carbon tax that will make up for the trip's environmental effects, they're not having it. But there's a quick fix, according to a 2010 study

: When the price bump is called an offset rather than a tax, Republicans will pay up as often as the Democrats (who are just as likely to favor a tax as an offset). One extra syllable to garner bipartisan consensus

? Wow, that was easy. The order of the options. People asked "paper or plastic?" will tend to go for the recyclable paper bags, while people asked "plastic or paper?" will often choose the environment-strangling plastic bags

, who studies how people make decisions related to climate change and the many ways in which those decisions don't make sense. For choices like this where we don't much care---and really, paper and plastic bags are equally easy to carry home---query theory

tells us that people often pick what they want based on how the options are presented; they tend to go for whatever they heard first. Even if it's only a three-word question. (By the way, it's not actually that clear

whether paper or plastic is better

, but it seems most people haven't heard that, based on the fact that they keep asking or assuming it's paper.) Whether we get a pep talk. Irreversible change to the planet's climate is a scary thing. But people are less likely to believe that climate change exists when they're told what a disaster it will be, a recent study

showed, then when they're giving an "upbeat message" about solutions. So, the worse it is, the more people are convinced it's not happening. Self-fulfilling prophecy, anyone?