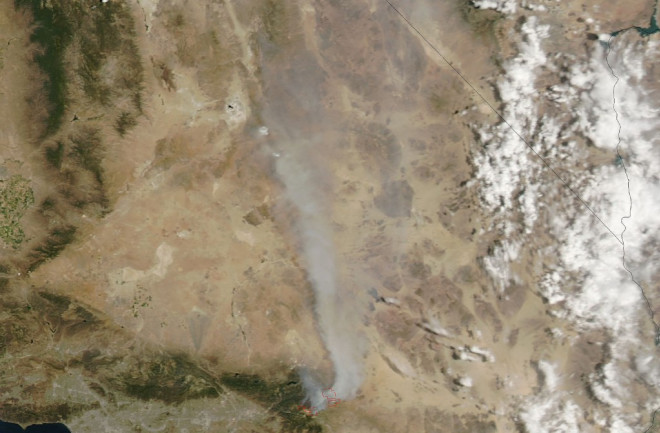 NASA's Aqua satellite acquired this image of smoke from the Lake fire streaming north on June 25, 2015. The fire was burning in southern California in San Bernardino National Forest. The Los Angeles basin is to the left of the red outlines, which indicate hot spots where MODIS detected unusually warm surface temperatures associated with fire activity. (Source: NASA Earth Observatory) |Please see the update below about questions that have been raised about whether this was truly a hobbyist's drone.| I check in at NASA's fabulous Earth Observatory web site almost every day, because I know I'll be treated to spectacular imagery and also learn something new. Today was no different, except this time instead of being edified I wound up getting enraged. Along with publishing the image of Southern California's Lake Fire above, the folks at the Earth Observatory noted this:

Hobbyist drones have hampered firefighting efforts and contributed to the fire’s rapid growth, according to news reports.

Click that 'news reports' link and you'll be taken to a Los Angeles Times story. It reports that a hobby drone buzzing at 11,000 feet over the fire had caused the pilot of a jumbo DC-10 aircraft laden with 10,800 gallons of fire retardant to turn away from the drop point. That point was was chosen specifically in hopes that homes in the tinder dry forest could be saved from the Lake Fire's flames. |Update 6/26/15: As a couple of commenters below point out, there are questions as to whether the drone could have been piloted by a hobbyist. It was flying at a very high altitude, and it had, according to one news report, a four-foot wingspan. This has led to speculation that it was a military drone. In fact, the hobbyist claim does seem somewhat suspicious to me. I'll try to track down more information about this and report what I learn. Either way, the pilot still qualifies as an idiot in my book. |

The DC-10 diverted to another fire along the Nevada border, and two smaller planes that had been following the jumbo air tanker had to jettison their retardant too because they couldn't land with all that weight. The failed mission is estimated to have cost between $10,000 and $15,000. There really is only one word to describe the pilot of that drone — a person who has endangered the lives of the pilots and hampered efforts to save people's homes: IDIOT. And the idiocy doesn't stop there. On their way back to base at Lake Arrowhead, the pilots "spotted another drone 1,200 feet above ground, far above the 400-foot limit set by the FAA for unmanned aircraft," according to the L.A. Times article. This really has to stop. Thanks in part to unusually warm temperatures and strong winds, the Lake Fire has grown to about 30,000 acres — that's more than half again as large as the island of Manhattan. Although no structures have been destroyed yet, 7,390 are threatened, according to InciWeb, the federal incident information system. And the blaze is only 19 percent contained.