By Keith Kloor, a freelance journalist whose stories have appeared in a range of publications, from Science to Smithsonian. Since 2004, he’s been an adjunct professor of journalism at New York University. You can find him on Twitter here. Last year, after Al Gore said in a speech that climate change was responsible for various extreme weather events around the globe, he got spanked by Oxford climate scientist Myles Allen, who wrote a column in the Guardian entitled, "Al Gore is doing a disservice by overplaying the link between climate change and the weather." I have to wonder if Allen is now thinking the same thing of NASA climatologist James Hansen. Because, as New York Times reporter John Broder puts it, Hansen, this week, has "roiled" the climate science community "with a new scientific paper explicitly linking high concentrations of carbon dioxide and other heat-trapping gases to recent severe heat waves and drought." 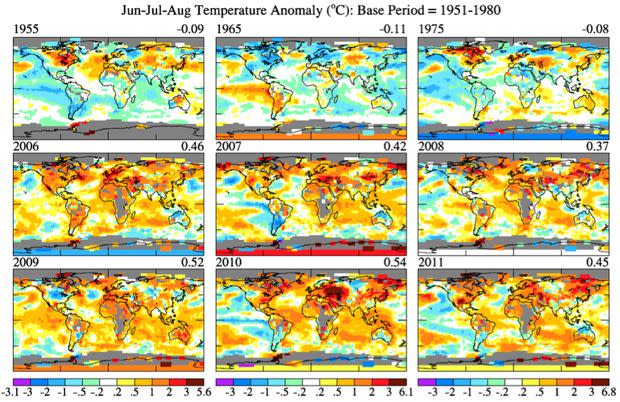 The controversial paper was published on Monday in the Proceedings of the National Academies of Sciences (PNAS). A day earlier, Hansen previewed the study's findings in a Washington Postop-ed, in which he made this jaw-dropping assertion:

It is no longer enough to say that global warming will increase the likelihood of extreme weather and to repeat the caveat that no individual weather event can be directly linked to climate change. To the contrary, our analysis shows that, for the extreme hot weather of the recent past, there is virtually no explanation other than climate change.

What recent past is he referring to, specifically? Hansen and his two coauthors are attributing the 2003 European heat wave, the 2010 Russian heat wave and last year's droughts in Texas and Oklahoma to climate change. These claims, Justin Gillis notes

in the Times, "go beyond the established scientific consensus about the role of climate change

the PNAS paper as convincing, while NOAA's Martin Hoerling has derided it. He told the Times:

This isn’t a serious science paper. It’s mainly about perception, as indicated by the paper’s title. Perception is not a science.

The paper is a bit of an odd duck, stylistically. It begins by editorializing about "the need for the public to appreciate the significance of human-made global warming" and concludes with an endorsement of a policy that would raise the price on carbon emissions sufficient enough "to spur transition to a clean energy future." In between is a discussion of the study's results and methods that attributes heat extremes of recent years to anthropogenic global warming. The chances of it being anything else, the paper argues, are virtually nil. Not so fast, says Peter Stott of the Met Office (the UK version of the National Weather Service), who studies

the relationship between climate change and extreme weather. He told New Scientist

While we can provide evidence that the risk of heatwaves has increased, we cannot say that the chances of such heat waves were negligible before global warming set in.

Despite its bold claims and unconventional format, Hansen's paper is the latest contribution in a growing, nascent field

. A state of the science on "attribution" of recent extreme weather events has just been published

in one journal---which was widely covered in the media. But speaking of perception, I wonder if the legitimacy of climate attribution studies (the investigation of extreme weather/climate change linkages) might be undermined by those who have a tendency to emphasize a global warming connection to all extreme weather. I discussed the pitfalls of this in a column

earlier in the year for the Yale Forum on Climate Change & the Media. In that piece, I quoted the perspective of numerous climate researchers, including Cliff Mass, an atmospheric scientist at the University of Washington, who, in April, had written

It is happening frequently lately. A major weather event occurs---perhaps a hurricane, heat wave, tornado outbreak, drought or snowstorm---and a chorus of activist groups or media folks either imply or explicitly suggest that the event is the result of human-caused (anthropogenic) global warming... Part of the problem is that a small minority of my colleagues—people who should know better—are feeding the extreme-weather/climate hype in the mistaken belief that by doing so they can encourage people to do the right thing — lessen their carbon footprint."

with "over-the-top" claims made in the press by activists, climate writers and national pundits like Paul Krugman

. He is not the only one concerned with this trend. John Nielsen-Gammon, the Texas State Climatologist and a professor of Atmospheric Sciences at Texas A&M, recently laid out

why it is "dangerous scientifically to focus on actual [extreme weather] events." He writes:

First, one loses the ability to specify odds objectively if the threshold for the extreme event is not chosen prior to the actual event itself. Second, purely according to statistics, most actual extreme events that end up getting studied will be events whose odds have increased — the events whose odds have decreased won’t be happening as frequently!

Whatever the verdict ends up being on the Hansen et al. paper

, one thing we can be sure of going forward: The chances of extreme weather events being discussed in relation to global warming are now pretty good. What that bodes for the field of climate science remains to be seen.