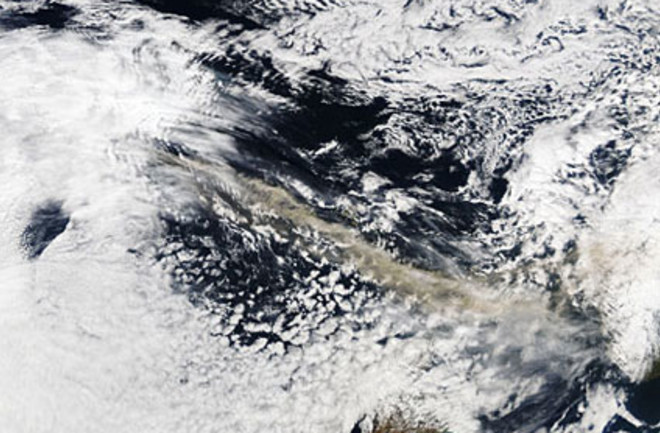 If past is prelude, then the volcanic eruption in Iceland whose plume of ash has grounded almost 300 flights across Europe may not only affect air travel in the coming days, it may also have a lingering impact on Europe's weather. Experts are looking back to the aftereffects of a previous eruption--when the Laki volcano in Southern Iceland exploded more than 200 years ago. That explosion

had catastrophic consequences for weather, agriculture and transport across the northern hemisphere – and helped trigger the French revolution [The Guardian].

The Laki volcanic fissure erupted over a eight month period between June 1783 and February 1784. Within Iceland, the lava and poisonous clouds of gas ushered in a time known as the "Mist Hardships": farmland was ruined, livestock died in vast numbers, and the resultant famine killed almost a quarter of the population. The eruption's impact wasn't confined to Iceland alone. Dust and sulfur particles thrown up by the explosion were carried as a haze across Northern Europe, clouding the skies in Norway, the Netherlands, the British Isles, France, Germany, Italy, and Spain. In conjunction with another volcanic eruption and an unusually strong El Nino weather pattern, the Laki eruption is thought to have contributed to extreme weather across Europe for the next several years. Describing the summer of 1783 in his classic Natural History of Selborne, British naturalist Gilbert White wrote it was  "an amazing and portentous one … the peculiar haze, or smokey fog, that prevailed for many weeks in this island, and in every part of Europe, and even beyond its limits, was a most extraordinary appearance, unlike anything known within the memory of man"

[The Guardian]. Gilbert wrote that the haze blanked out the sun at midday, that it was "particularly lurid and blood-colored at rising and setting," and that the heat was so intense that "butcher's meat could hardly be eaten on the same day after it was killed." This bizarre summer was followed by an usually harsh winter, historians say.

Environmental historians have also pointed to the disruption caused to the economies of northern Europe, where food poverty was a major factor in the build-up to the French revolution of 1789 [The Guardian].

Eyjafjallajökull (pronounced AY-ya-fyat-la-yo-kult) say that while the scale of crisis may not be the same, continued eruptions at the spot could cool temperatures in Northern Europe. Richard Wunderman, a volcanologist with the Smithsonian Institution’s Global Volcanism Program said the volcanic plume contains a lot of sulfur

, creating a regional "volcano weather" effect. But a bigger concern lurks nearby.

Just a few kilometers to the east of the erupting vent is a much bigger and potentially more dangerous volcano called Katla. In the past, when Eyjafjallajökull erupted, Katla did too. So scientists are closely monitoring Katla to see if it, too, might go [Science News].

The one bright spot in the current explosion, say scientists, is that there may be enough aerosols in the atmosphere to cause brilliant red sunsets across Europe. Related Content: 80beats: Volcanic Eruption in Iceland Causes Floods, Shuts Down European Air Travel Bad Astronomy: Iceland Volcano Eruption Making an Ash of Itself DISCOVER: Disaster! The Most Destructive Volcanic Eruptions in History (photo gallery) DISCOVER: World Versus the Volcano, how massive eruptions leave the world cold and hungry 80beats: Three Miles Down in the Carribean, the Deepest Volcanic Vents Ever Seen 80beats: Volcanoes on Venus Could Be Alive and Ready To Erupt 80beats: Congo Volcanic Eruption Threatens To Surround Native Chimps with LavaImage: NASA/MODIS Rapid Response Team