Hurricanes with Female Names Are Deadlier Than Masculine Ones 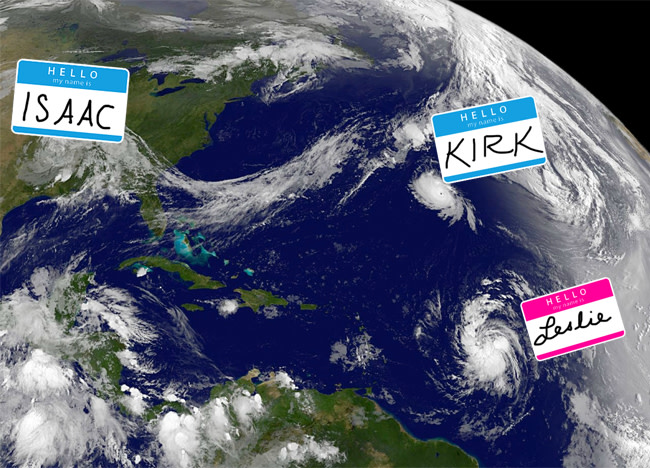 Rudyard Kipling was right: "The female of the species is more deadly than the male." Even, apparently, when it comes to weather events. Hurricanes with female names have higher death tolls than those with male names, according to a study published today in the Proceedings of the National Academy of Sciences. And societal gender bias, researchers say, is to blame. According to the multi-part study, the more feminine the name assigned to a severe hurricane, the higher its death toll. Researchers believe implicit gender stereotypes — women are less violent than men, for example — skew the public's expectation of how dangerous an approaching storm really is and whether they need to take emergency measures, such as evacuation. Basically, people would be more likely to choose to ride out Hurricane Britney than Hurricane Brutus.

The study's conclusions were based on a series of reviews and experiments. Researchers compiled fatalities and other statistics, such as amount of damage, from the 94 Atlantic hurricanes that made landfall in the U.S. from 1950 through 2012. To avoid skewing their results with outliers, they removed the two deadliest hurricanes — 2005's Katrina and 1957's Audrey, both of which happen to have female names. Researchers then asked people unaware of the study's hypothesis to rate the historical storms' names based on how feminine/masculine they seemed. The results were striking: strong hurricanes with "relatively feminine" names caused nearly three times more deaths than strong hurricanes with "relatively masculine" names. Because weak storms were less likely to cause any fatalities, the difference in these storms' "symbolic gender" was less of an indicator of deadliness. Researchers conducted several lab experiments to test their hypothesis further. Each experiment examined risk perception of a storm based on a different aspect of its name, such as gender, popularity or likability. The only factor that consistently influenced people's risk rating was the storm's "gender."

However, in a subsequent experiment, when participants were asked explicitly whether a male-named or female-named hurricane would be more dangerous, their replies were evenly divided. This finding within the study, say researchers, is evidence that the bias toward a hurricane's "gender" is implicit in society and may be difficult to overcome. Researchers also found that men and women were equally likely to have the hurricane gender bias. Before 1953, Atlantic hurricanes were named using either date and location of landfall or by latitude and longitude coordinates. From 1953 until 1979, storms were assigned women's names alphabetically, based on a list compiled prior to each year's hurricane season — authors of today's study note that "meteorologists of a different era considered (women's names) appropriate due to such characteristics of hurricanes as unpredictability." Since 1979, however, the National Hurricane Center has alternated male and female names for the storms, assigned arbitrarily based on predetermined lists. The study's findings likely will become fodder for late-night talk show hosts, but the implications are serious, say the researchers. Meteorologists and policymakers who want people to take evacuation orders more seriously should consider changing how they name the storms in the future. Might we suggest they start with Attila, Conan and The Krusher?