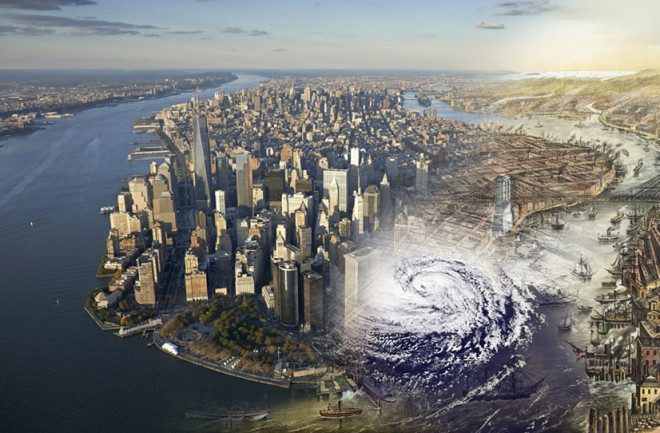 Beginning on Oct. 29, 2012, the sea paid a little visit to New York. In the space of just a few hours, Hurricane Sandy threw history into reverse, sabotaging several hundred years’ worth of hard-won and fabulously expensive reclamation.

An hour southeast of Manhattan, Jones Beach, a once-swampy strip of barrier island raised 10 feet by urban planner Robert Moses in the ’20s, took a terrible beating. Crashing waves reduced the wooden boardwalk to splinters. Lifeguard shacks were tossed around like toys. Metal highway signs snapped, underpasses ﬂooded. The storm left such a powerful statement in its wake that even Donald Trump sat up and took notice. Hurricane Sandy put the kibosh on his plan for 86,000 square feet of development on the beach. Trump on the Ocean became Trump in the Ocean.

Next door at Long Beach, water surged over the sand dunes holding back the sea and rose 5 to 10 feet high in the streets. Houses burned, and basements ﬁlled with sewage.

“Redraft of the Castello Plan, New Amsterdam in 1660,” aligned with a Google Earth image of the same location, shows how much of lower Manhattan’s modern shoreline was underwater in the 17th century. From The Lionel Pincus & Princess Firyal Map Division, The New York Public Library

So it went on westward down the shore: The storm threatened to turn the reclaimed land of Kennedy Airport back into mushy meadow muck; it put 15 feet of water in an AirTrain connector to a Delta Air Lines terminal. After centuries of being filled in or diverted, what was left of Coney Island Creek overﬂowed with such a vengeance that it nearly killed a group of city utility workers trapped by the rising waters. Floodwater gushed into the former marshlands along Brooklyn’s Gowanus Canal, coating the neighborhood in an oily sheen, mangling metal security doors and tearing down walls.

In Staten Island, the storm’s impact was particularly deadly. Twenty-one people died in the borough, more than in the states of New Jersey, Connecticut and Pennsylvania combined. The carnage took place along the ﬂood-prone outwash plain on the south and east shores of the island, located at the crest of the New York Bight, where geography funneled the ocean’s angry waters. In the 19th century, this land was a desolate, tide-swept marsh. But then came its paving over in houses and roads. When Hurricane Sandy whipped through, the sea returned to the neighborhood.

The death and destruction, however, have not slowed plans near the island’s ferry terminal to Manhattan for the world’s tallest Ferris wheel — replete with a 100-store outlet mall — to be built close to where the storm drove 30-foot-long dock pilings through the ground ﬂoor of an apartment complex.

North along the onetime tidelands fronting the Hudson shore of Bergen Neck in New Jersey, the ocean breached seawalls and water poured into the streets of Hoboken and Jersey City. When the water receded from the backyard of one Jersey City home, it left its calling card: a brown watermark on a basketball-hoop backboard. Roughly half the city of Hoboken was ﬂooded, and when the storm surge peaked, 20,000 people found themselves completely surrounded by water. Before the 20th century, Hoboken had been an island, and so, brieﬂy, did it return to one.

As went Hoboken, so went the southern tip of Manhattan. The hardest hit areas were where colonial governor John Montgomerie, in 1730, granted New York title to land that was, at the time, still underwater. What Montgomerie conveyed, Hurricane Sandy took away. The East River broke through a bulkhead and poured into the city, reclaiming the Lower East Side and other parts of southern Manhattan built on landﬁll.

Predictably, what seemed to impress those in power in the immediate wake of the tragedy was the sheer dominance of the natural world. President Barack Obama said, “All of us have been shocked by the force of Mother Nature.” The governor of New York, Andrew Cuomo, added, “This was a major, major assault by Mother Nature.” Discussing the loss of life, Mayor Michael Bloomberg pointed out that “sadly, nature is dangerous.”

There is, of course, no denying the magnitude of this low-pressure system. Sandy caused the storm tide at the Battery, at the southern tip of Manhattan, to reach its highest level — 14.06 feet — since the start of record keeping at the site. What’s more, although ﬂood-insurance maps drawn by the federal government beginning in 1983 determined that 33 square miles of land in New York City remained at risk of a one-in-100-year ﬂood, Sandy resketched the maps and proved that, in fact, a remarkable 51 square miles of land — 17 percent of the city — was in jeopardy.

And yet to interpret the calamity as an act of nature is to make it seem as if the disaster came out of nowhere. Invoking Mother Nature risked leaving the impression that the long history of land-making and building in the ﬂoodplain had little to do with the catastrophe. Simply put, this was a self-inﬂicted calamity.

New York has been thumbing its nose at the ocean for over 300 years. The Dutch took some tentative steps into the ﬂoodplain of the East River back in the 17th century, but it was the English who invented a whole new form of property — land underwater — that allowed building to go forward in harm’s way. Still, it was only in the 19th century that the idea of New York as a limitless proposition led to the extensive development of coastal areas. That move came at the expense of the wetlands and mudﬂats that once safeguarded the shoreline and helped to mitigate the effects of storm surge.

Just weeks before Sandy struck, geophysicist Klaus Jacob, who had been urging New York to deal more aggressively with the threat of natural hazards for a generation, noted that the city had been “extremely lucky.” He added that he was “disappointed that the political process hasn’t recognized that we’re playing Russian roulette.” The growth imperative — that is, the idea of New York as an inﬁnitely expanding entity in terms of its population, economy and relations with the land — drove relentless development at the expense of the sea.

High-density life unfolded in New York during a period of relative quiescence in intense hurricane activity. An 1821 hurricane scored a direct hit on the city, producing an estimated 10- to 11-foot storm surge. While subsequent storms in 1893, 1903, 1938 and a spate in the early 1950s buffeted the region, the sporadic occurrence of hurricanes led the city to spend most of the 20th century planning for snowstorms and garden-variety ﬂoods.

Not until 1960 did a storm comparable to the 1821 hurricane in terms of its effect on the tide strike the city. Hurricane Donna, which made landfall on Long Island and caused the wind to gust to 93 mph at LaGuardia Airport, raised water levels at the Battery to 13.3 feet, the second-highest level ever recorded at the site. The scale of the ﬂooding caused by Donna prompted consideration of a proposal to build hurricane barriers.

While the idea was being mulled over, the surface of the sea cooled off. The climatic change at issue is known as the Atlantic Multidecadal Oscillation (AMO), a periodic cycle of warming and cooling of surface temperatures in the North Atlantic. During the warm phase of the cycle (coincident with the 1938 hurricane, the ﬂurry of storms in the 1950s and Hurricane Donna), there is an increased chance that weak storms will evolve into more intense hurricane systems. But after 1965, the cycle shifted into its cooler phase, working to insulate New York. The hurricanes that did make contact turned out to be relatively anemic. Interest in hurricane preparedness and protection waned as Hurricane Gloria in 1985 and Hurricane Bob in 1991 petered out as they neared New York. In 1999, the metropolitan area again escaped disaster when Hurricane Floyd, downgraded to a tropical storm as it reached the city, arrived at low tide. Floyd failed to inflict any signiﬁcant ﬂooding.

Then the climate changed again. The warm phase of the AMO returned. In 2006, Max Mayﬁeld, the director of the National Hurricane Center, said, “It is not a question of if a major hurricane will strike the New York area, but when.”

Typical of development throughout the Greater New York City area, land reclamation reduced New Jersey’s Meadowlands to a fraction of itself in little more than a century. Kellie Jaeger/Discover

New York was not ready for such an eventuality. A 2008 study by the Organization for Economic Cooperation and Development examined the risk of exposure to coastal flooding caused by storm surge for 136 port cities around the world. Greater New York was among the four most vulnerable spots. (The other three were Miami, Osaka-Kobe in Japan and New Orleans.)

And even though New York’s gross domestic product surpassed that of London, Tokyo and Amsterdam, its level of defense against coastal flooding lagged well behind. While the other three cities all had substantial protections in place to defend against at least a one-in-1,000-year storm, New York was shielded to just a tenth of that level.

More worrisome still was a subsequent study examining the physics of hurricanes and storm surge. According to the study’s ﬁndings, Gotham’s risk of experiencing “a catastrophic coastal ﬂood event” was higher than had been thought. In trading in its tidal wetlands for land development, the city had denied itself a frontline defense that, if the sedimentary record is any guide, kept all but the most vicious ﬂooding at bay.

It is too early to tell how Sandy will shape the future of New York. Water was still sloshing around in the Battery Tunnel when the advocates for Gotham unbound spoke up in favor of yet more untrammeled growth. Vishaan Chakrabarti, director of Columbia’s Center for Urban Real Estate, an organization behind the idea to vastly expand lower Manhattan with yet more landﬁll, acknowledged that the promotion of waterfront development had put people into the path of danger. Still, he made clear his intention to foster more growth, holding up Dutch reclamation efforts as a model.

“They really don’t treat the water in this eggshell kind of way that they do in the United States,” Chakrabarti remarked about the Dutch. “They reclaim the land, use dredging material, do a whole variety of things to reshape the shoreline, like we ﬁrst did when we were New Amsterdam.”

To characterize as hesitant what has gone on in the way of wetland loss and land-making in Greater New York is, at best, a gross distortion of the historical record. Moreover, nothing the Dutch colonists did at New Amsterdam comes even remotely close to the transformation of land and water that has happened since the 19th century. And that is still happening at places such as Manhattan’s West Side, where Hurricane Sandy did nothing to dampen the spirits for a 26-acre real estate development called Hudson Yards, much of which is set to rise directly in the one-in-100-year ﬂoodplain.

But New York’s ecological history should teach us a moral lesson. Namely, that port cities across the world — from Shanghai to Mumbai, Tokyo to Bangkok — need to preserve as much wetland and unfragmented open space as possible. There must be a less rigid and less militantly developmental approach to life on the edge of the ocean. We must even seriously entertain the idea of retreat. Those questing for more growth bear the burden of addressing a city’s true ecological footprint. There must be, in short, some owning up to the limits imposed by life in an estuary.

Copyright © 2014 by Ted Steinberg. From the forthcoming book Gotham Unbound: The Ecological History of Greater New York by Ted Steinberg, to be published by Simon & Schuster. Published with permission.

[This article originally appeared in print as "Development of a Disaster."]