An animation of microwave imagery shows the eye of Hurricane Matthew crossing the eastern tip of Cuba and heading toward the Bahamas. The animation covers almost 14 hours starting at 8 p.m. EDT on Tuesday, Sept. 4, 2016. (Source: Cooperative Institute for Meteorological Satellite Studies) After getting torn up a bit as it passed over the mountains of Haiti and eastern Cuba, Hurricane Matthew reorganized today and began pummeling the Bahamas. As of 8 p.m. EDT on Wednesday night, Matthew was swirling through the Bahamas with maximum sustained winds of 115 miles per hour, making it a Category 3 storm. "Matthew is likely to produce devastating impacts from storm surge, extreme winds, and heavy rains in the Bahamas," the National Hurricane Center stated in its forecast discussion this evening. As it takes dead aim on Florida, Matthew is forecast to strengthen over unusually warm waters. The storm is expected to move very close to the east coast of Florida by Thursday morning, and then cruise north, hugging the shoreline. Hurricane conditions are forecast for much of the coast, beginning late Thursday and then spreading northward on Friday.

Bizarrely, the forecast is for Matthew to take an extreme turn to the east, and then start heading back south, as the forecast track above shows. Computer models suggest that the storm could even loop back toward Florida early next week. If this is indeed what happens — and by no means are forecasters sure about this — the storm would likely approach Florida in a weakened state. But even if so, Matthew's return could bring more torrential rain and storm surges to coastal areas already devastated from the first encounter with this ferocious storm. For now, keep in mind that this is just a possibility — albeit a scary one. 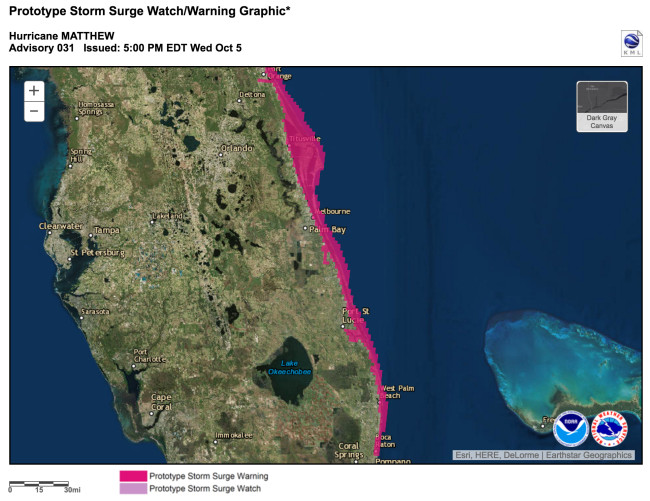 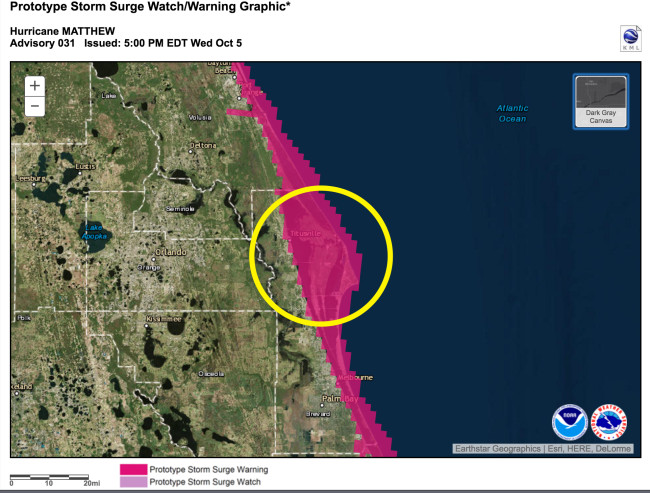 Source: National Hurricane Center The area I've circled in yellow is the location of NASA's Kennedy Space Center. In 2004, Hurricane Jeanne is reported to have caused $100 million of damage to the space center, Cape Canaveral Air Force Station, and Patrick Air Force Base — even though its winds were of minimal hurricane strength. Should Matthew strike with stronger winds and also push up inundating storm surges... Well, let's fervently hope not.